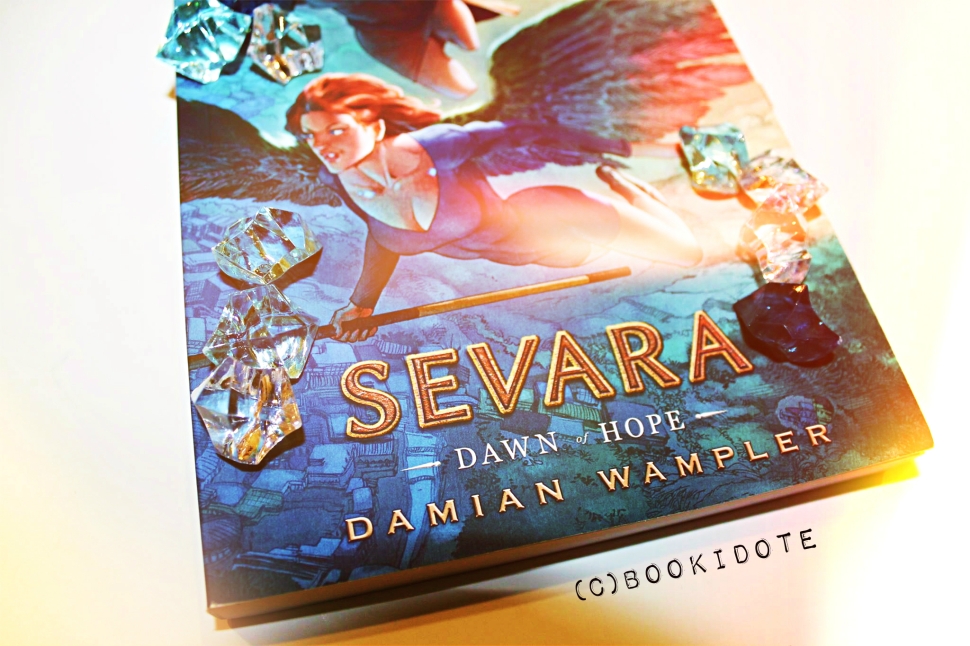 “iladis manus tu, iladim manus ti,
“What does it mean?
“You will be remembered, for I will remember
you.”

The premises behind the world of Sevara is bound to send chills down any free man. Girls are unwanted at birth. They’re sent to orphanages, only to be bought one day or the other by men to mold them into hard-working slaves. Society is controlled by the rich and the poor suffer in the perimeter. Corruption flirts with politics like never before and Evil has never had an uglier face. Sevara tells the story of a young girl who reaches the age of 15 and is sent away from her orphanage to roam the streets of Plexus, blindly and without resources. However, she only has a token to guide her journey in finding her roots. Her adventures brings her to set forth a revolution to bring peace, equality and freedom for all the girls, the poor and the unwanted. As she takes upon the future of Plexus, she also crosses paths with a couple guardians who will soon set Sevara on a road to a life she would never have imagined.

“The Codex is our moral code. No one is higher than the law. Those who break the law must be broken.”

The book is divided in three major parts and introduces readers to a bunch of characters quite quickly. What caused this novel to be quite heavy on the mind was the narration. Having it told with a third-person point of view made my reading sessions quite difficult. I felt detached from the story and distant from the characters. The narration never gave a helping hand in connecting with the characters and truly enjoying the adventure. The story itself was enjoyable and filled with action – and gore that you sure don’t expect from a book with a teenager as a protagonist. It had its fair amount of twists throughout the story to stun readers not to often. Great ideas where touched upon in order to make the dystopian life clear to readers and that was fun to see. Gender equality was probably the most pertinent and well-developed theme throughout the novel. I do have to say that some of these dystopian elements felt like they were crammed into the book only to make sure readers know that life in Plexus is not pleasant. For example, the Codex that covers all the laws and rights of citizens felt superficial in the story. Although it gets blamed quite often for all the bad that happens, the way the blame is shown isn’t quite memorable. Furthermore, a huge part of the book focuses a lot on the military action that goes on in the story and that felt like it was dragged a little too long. If you enjoy long sequences where on-ground war scenes are detailed meticulously, then don’t look too far, this will do the trick.

“Hope comes from the most unlikely places, and love can appear in even the hearts of the darkest men.”

As you first encounter some of the characters, you are prompted to feel like they might play major roles in the story and have more development throughout the story, but sadly it wasn’t the case. This is notably true for Almos Deerman, Wren and Alta. These characters barely appear throughout the novel and left me unimpressed when they reappear in the last act. It was far more disappointing when Wren and Alta, two shapeshifters, barely appeared throughout the novel. It sort of saddened me when completing the novel since they were the characters who brought the fantasy twists to the book. On the other hand, Sevara showed every possible characteristics to a brave, strong and determined heroine. Every word spoken and every action executed from her part showed her natural instinct to saving the world and bring justice to those who brought evil, corruption and despair to others. Regrettably, the narration kept me distant from the character and never had me excited or saddened for her. Although Sevara prevails in showing strong traits for a female-lead character, I thoroughly believe there wasn’t much character development in her. In fact, she’s driven by a need to bring justice to the Unwanted and never shows any learning curves. She seemed to know how to do it all and what to say, no matter who she speaks too. Even Lief, the protagonists main love, felt more intriguing from a third-person point of view, although he seemed to have his emotions controlling his every action.

“alone, it’s just a twig, but as part of a group it becomes strong, even deadly.”

Damian Wampler still succeeds in creating a unique universe plunged in war and injustice. The descriptions used to create this world managed to plunge me in a dark city that needed to learn some basic human rights. Although the story unfolded into a huge political mess, the novel ends with a bang and a lot of action before it. The ending still left me dumbfounded, especially by Sevara’s actions that seemed completely out of character. There’s no doubt that a more visual medium (comic or cinema) would deliver the story a lot better. Sevara remains a fun novel with its own flaws. With a universe worth expanding and exploring, its future remains promising.

As always, don’t forget to share your thoughts on this novel, as well as like and follow us as we continue to get you all reviews to enjoy. So what are you waiting for? If you’re interested in this story arc, you can purchase a copy of Sevara (Volume 1) – Dawn of Hope