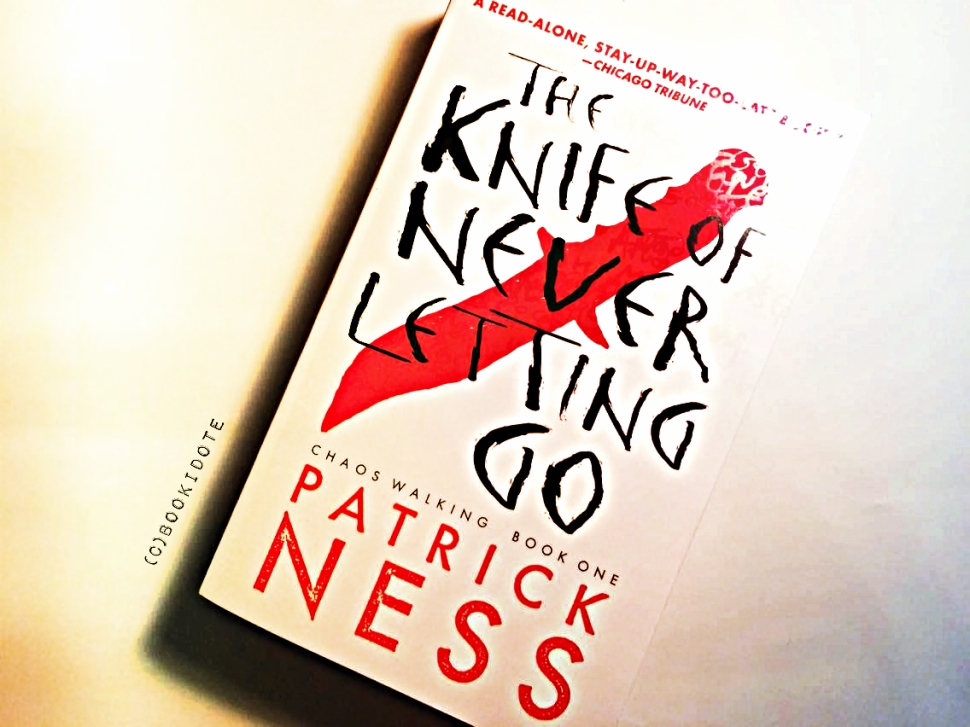 “We are the choices we make.”

It takes a lot of guts to go through with an idea like this one. Patrick Ness seems to never settle with the simple and unoriginal. Known for his famous Chaos Walking trilogy, I’ve only contented myself of reading some of his more recent works till this day. It was only a matter of time before I tackled one of the most popular young adult novel out there. A couple pages into the book, I knew that I was about to enter a brand new universe. One that doesn’t limit itself in the boundaries of reality. Suffice to say that Patrick Ness knows his shit. To make this even more memorable was the fact that I had completely forgotten what the book was about. It is always a pleasure to know that all your books on your shelves are there to be read for a reason. Whether you remember or not that reason is only a plus to the surprises that the book has in store for you. Jumping into this book clueless was definitely worth it. Why? Because this novel relies strongly on suspense and readers start of with little to no information on what’s going on. 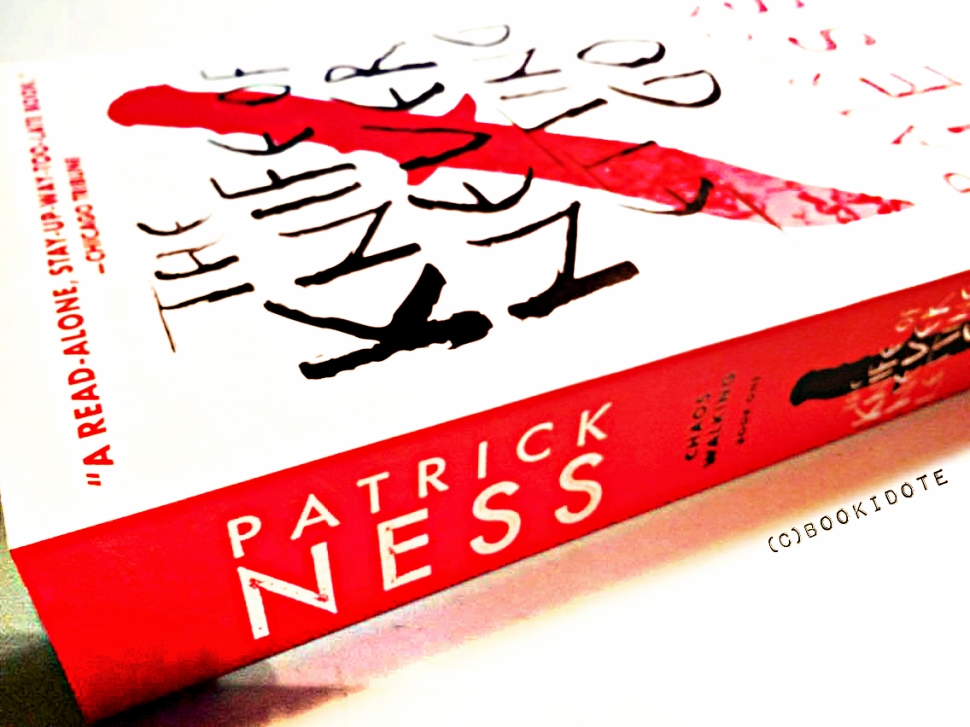 Highly action-packed, this science fiction novel succeeds in keeping the reader hooked to a desire of information till the very end. This is a story that is impossible to speak of without spoiling something. The very plot is set around a kid who only knows what he’s been fed. And the fact that what he knows isn’t all there to is to the world he lives in makes readers just as clueless as the main protagonist. The Knife of Never Letting Go is set in a town where people can hear the thoughts of others and animals (not as coherently as humans, of course). Todd Hewitt, the last boy in town who’s a month away from being a man, is sprung into an adventure without the slightest clue what to do, and most importantly why. Pursuing a life of running away from the unknown, a path of self-discovery and a pursuit of manhood is all that lies ahead for our protagonist. The story is narrated from his point of view, an element that can cause outrage for readers who can’t stand his unique voice. In this story, while Todd is highly anticipating the day that he turns into a man, things become a little to hectic for him to really appreciate the remaining days of his innocence. Intensity will reach peaks and surprises are around every corner for the last boy of Prentisstown.

While the narration can be quite tedious when coming from a teenager who could not get an education due to some rather horrible circumstances in the town of Prentisstown, Todd’s character manages to capture innocence at its purest. It’s always nice to see characters have their own voices, but Todd’s voice is one that needs some getting used to. He’s someone who can easily irritate you because he acts on little knowledge. But this is what makes me enjoy it so much more. A child who’s been fed one story and who has been limited access to further knowledge is one that can’t do anything other than to believe what he’s learned. By pushing him into the wilderness and face life on his own, he’s also brought to learn the coldness of the world. Todd Hewitt easily learns relativity in all its facets. What is manhood? What is caring? What is hope? This book brilliantly showcases that what he sees as normal isn’t what other people from other places of the world find normal. Being on the brink of manhood, a concept that Prentisstown forged into him, Todd is also a lot more sensitive to becoming a man. But what he doesn’t know is that being a man is something far more complex than an age threshold. Even in the simplicity of the world, Patrick Ness’ cleverly uses characters and objects for imagery and symbolism purposes. That knife alone has given so many life lessons that some parents can’t even do nowadays. I guess we can say that sometimes, the best lessons are learned through experience rather than show-and-tell. 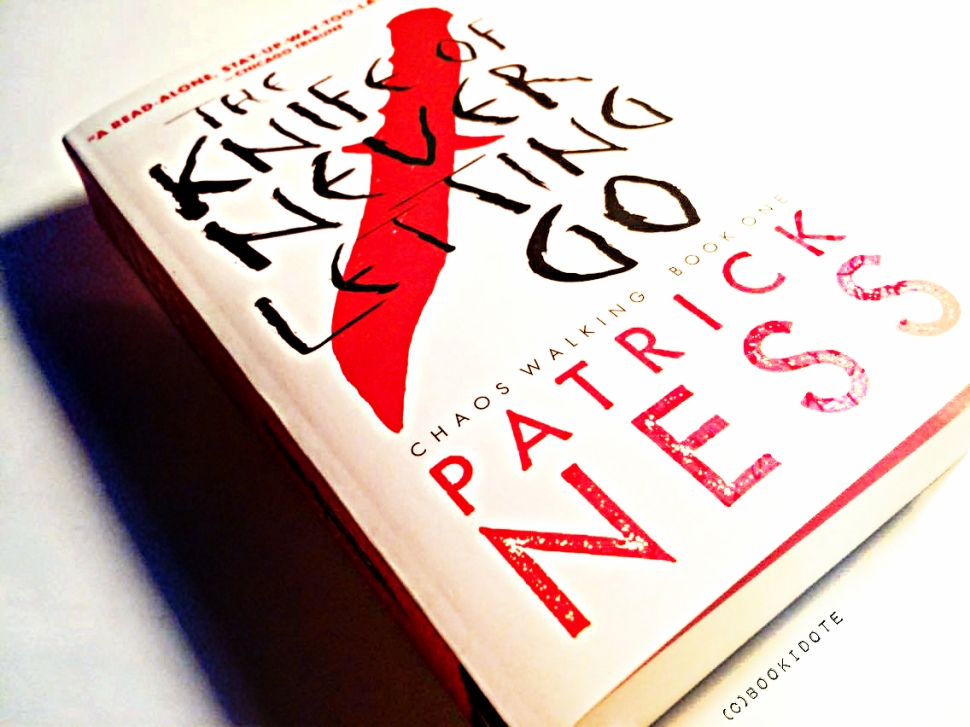 Todd Hewitt makes up for a fantastic character. His evolution throughout this roller-coaster of a novel shows a confused, frustrated yet determined child. Although he doesn’t know what he’s looking for or why his enemies are looking for him, he slowly discovers himself and fights for his convictions. In fact, at every major juncture, Todd ends up learning a life lesson, one that isn’t only crucial for him, but stunningly true for readers. For example, there comes a moment where Todd learns that good things will always have something bad to follow. If that isn’t shocking, especially for a kid to realize such a thing, then I don’t know what is. As impossible as it is to talk about the events that unfold in this book, one thing remains factual. This book never ceases to continuously toss live grenades into the lap of readers. While some events were quite predictable and can be foreseen, the shock value of these moments remain as high as they possibly can be. Patrick Ness definitely didn’t disappoint with this first book in his trilogy. The Knife of Never Letting Go is the story of Todd Hewitt, a kid who sees his innocence challenged and lives every day as his last. It is the story of a child who learns to become a man through choices, choices that will question the fairness of life and the mysteries of living.

Did you read The Knife of Never Letting Go yet? What did you think about it?

How about you read this novel for yourself!

You can purchase a copy of the novel @Amazon