There’s nothing like stumbling into a whole new life when things don’t go your way. Adi Tantimedh writes the story of Ravi Chandra Singh, a failed religious scholar and a former high school teacher who becomes a private investigator right out of the blue. This Indian P.I. isn’t like any other (who is, right?). People see something special in him. At least that’s what everyone at the Golden Sentinels, a London private investigations and security company, think of him. Even if Ravi doesn’t believe in his unique abilities, he does know one thing about himself. He can see Gods. They don’t seem to want to speak to him. No, no. But they do appear at random moments and seem to have been thoroughly modernized to our time and age. Don’t expect them to be represented as they usually are in Hinduism. Enrolled in a company that deals with highly placed members of society—they always seem to have really sketchy lives and the most messed up stories to tell—Ravi quickly finds out that his new job is about to drastically change his life. And the exit? Not really an option.

The book contains four stories about four different investigations. They can basically be seen as four distinct episodes of a TV show. In fact, readers will quickly catch on that the book was written like a screenplay. After all, Her Nightly Embrace is a soon-to-be TV adaptation and there’s nothing more perfect than having everything set for filming. If the style of writing, the various plot holes and the difficulty to emotionally attach to the characters weren’t direct indicators of what that the filming and actor performances were meant to make up for, this book would probably suffer a lot in story-telling and be a lot harder to pardon for its problems. Nonetheless, Adi Tantimedh delivers stories with increasing intensity and quickly shows readers that Ravi tumbled into a life filled with disasters. The character rapidly learns the ropes to being a great private investigators and doesn’t shy from reiterating the importance of social engineering. That very concept is held up as a trophy among the members of the Golden Sentinels, and Ravi makes sure to it whenever he goes into the real world. After all, he needs to make up for the lack of P.I. experience somehow!

Filled with a quirky cast of characters, Her Nightly Embrace uses them sparingly to draw out their unique stories. While it was easy to spot the different molds of personalities, a lot of their dialogues felt corny and could only be improved thanks to actors and their respective performances. The novel does contain a fairly numerous amount of characters, but as soon as you are acquainted with their stories, they quickly become easy to identify and remember. The book doesn’t dive deep into character development, but it is something to be expected when you’re only a couple episodes into a series. Ravi also has romantic relationships throughout the book to spice up his complicated life. Even if these love interests felt awkward, everything still ended up having a purpose for the stories that were being told. To mix things up a little more, readers are also presented with various Gods that appear in Ravi’s life. Each God was quickly mentioned and the author stayed concise in his explanation of their symbolism. This supernatural touch does make things quite interesting and funny.

Adi Tantimedh’s decision to put an Indian protagonist in a British context does open him up with various ways to embrace the Indian culture throughout the story. Ravi’s adventures are filled with a strong comedic value and a bunch of swearing. It sadly still remains a little distant from the never-before-seen when the plots are looked at for what they were. The stories are also filled with pop culture references and has a bunch of book title references to cultivate readers and spark a little smirk across the face of readers. However, Her Nightly Embrace honestly felt like a low-key crime drama that was meant to solely put in a laugh or two for its readers. Because the book felt a lot more like a screenplay, a lot of its potential for great storytelling were kept at a minimum. All the ideas were in place, but the driving force to keep everything together felt light and simple. It’s also in the interactions between the characters, which relies strongly on what the television adaptation will do with it, that threw away any chance to really capture my interest in the characters. 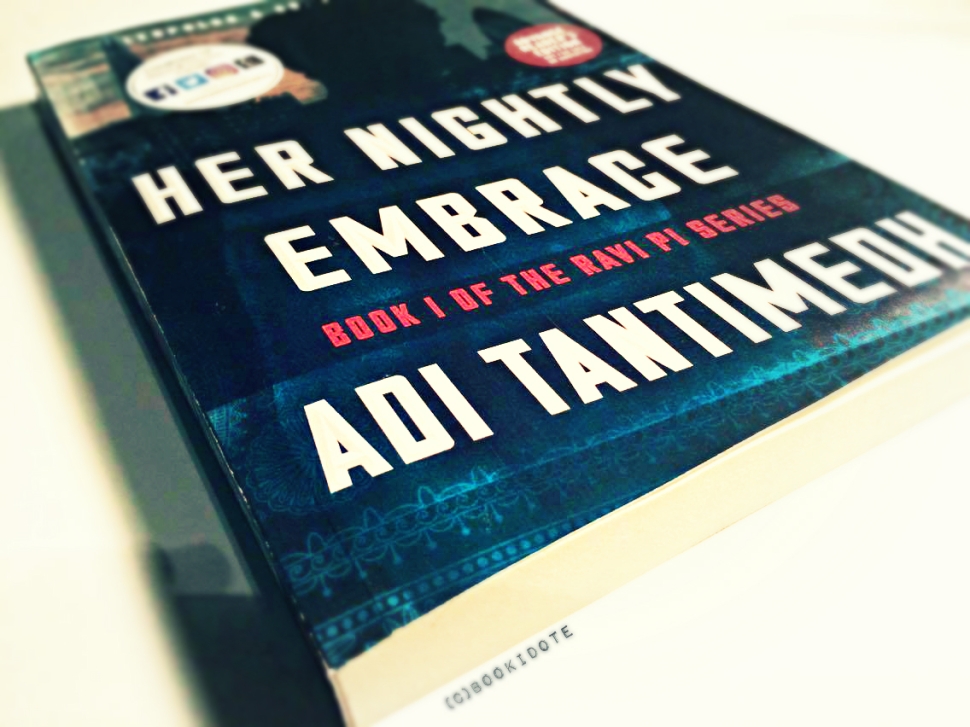 Her Nightly Embrace is a fun crime drama novel. It still has ways to go before it truly finds its identity, but its potential is there. Ravi’s ability to see Gods is probably the most noticeable element in the book and if the author continues to delve deeper into that angle, things can get quite thrilling. Trying to figure out how to deal with this problem, the protagonist finds himself wondering about his sanity more often than not. Although he doesn’t show signs of mental illness, the Gods continue to show up in the most unexpected moments throughout his adventures. In fact, they often foresight outcomes or represent emotional states of the character, and that was quite refreshing compared to the usual P.I. work. I personally thought it was a fascinating asset for the character since it was something pretty new for anyone who doesn’t often come across stories with Gods. While the first book in the Ravi PI series were simple and pretty predictable, the series has plenty of angles that it can explore to deliver compelling stories. It all lies in the hands of Adi Tantimedh and what he desires to show his fans.

Curious about the book? What about its TV show adaptation? As mentioned earlier, Adi Tantimedh’s book series will get an TV adaptation that is currently still in development. It will star NBC’s Heroes and Heroes Reborn star Sendhil Ramamurthy (the same man who’s on the cover of the first book; although all you see on the ARC is his shadow). Interestingly, the TV show will also be co-produced by Idris Elba. The same man behind the famous British TV show Luther—not too surprised by his presence when similarities between his show and Adi Tantimedh’s book can be observed! The Ravi PI series is fantastic for fans of Scandal, Luther or Castle (with a more comedic vibe) who are looking for something fun and entertaining.

THANK YOU TO SIMON & SCHUSTER CANADA FOR SENDING US AN ADVANCE COPY FOR REVIEW!

Do you want to read Her Nightly Embrace? How about you read this story for yourself!

You can purchase your copy @Amazon