“Everyone gets a chance to be brave.”

What a poor, poor storyarc to start things off. If you didn’t have time to check out my review of DC Universe: Rebirth #1 where I explain the new beginning for DC Comics after New 52, you should definitely do so now. Batman (Volume 1) – I Am Gotham is the very first storyarc to kickstart the Rebirth run for Batman and includes issues 1 to 6. I can’t stress enough how disappointing this was, especially when you’ve got your hands on one of the biggest superhero series to work with. Of course, plenty of fans would easily love to jump at this opportunity to compare this debut to the Scott Snyder era that has blown more minds than we can count. But even without doing so, I still found plenty of reasons to be sadened and remain in awe at how many steps backwards this took the Batman name. Tom King’s first story arc, I Am Gotham, is a pot of random ideas that simply didn’t stir well.

One of the biggest issues I had with this storyarc is how irrelevant Batman was in the whole story. What he basically was is the turning point in the life of two kids who later become super-humans. From that moment in their lives, and with the wise words of Batman that scarred their lives forever, the Caped Crusader becomes an outside observer. Somehow Tom King also made Batman a lot more open-minded in the idea that working as a team might be better for him. He also made the storyarc feel very repetitive in dialogue and greatly ignored that this is a series for Batman. While I can appreciate how fundamental Batman was to the lives of our new heroes, his character still got butchered in several ways, like his chemistry with others.

In fact, there’s no turning our heads to the horrible, I mean, really horrible, dialogues between Batman and Alfred. This is probably the storyarc with the most uncomfortable, awkward and implausible exchange between the two characters. Whenever they were to have a discussion, I couldn’t stop but wonder: “Is this for real?”. Tom King also thought that using Alfred as some sort of comic relief in issue 5 of 6 was a brilliant idea. Do you know what that singular moment reminded me of? The boss ‘dance’ battle in the movie Guardians of the Galaxy (Vol. 1). In fact, I also can’t help but see the influence of so many of these cinematic superhero movies on this short storyarc (Suicide Squad seems to be a trend in this one too). I don’t know where this need to alleviate danger by pummeling in a joke or two came from (Nop, I do know. *looks at Marvel’s Cinematic Universe*), but I’m not a fan of it. 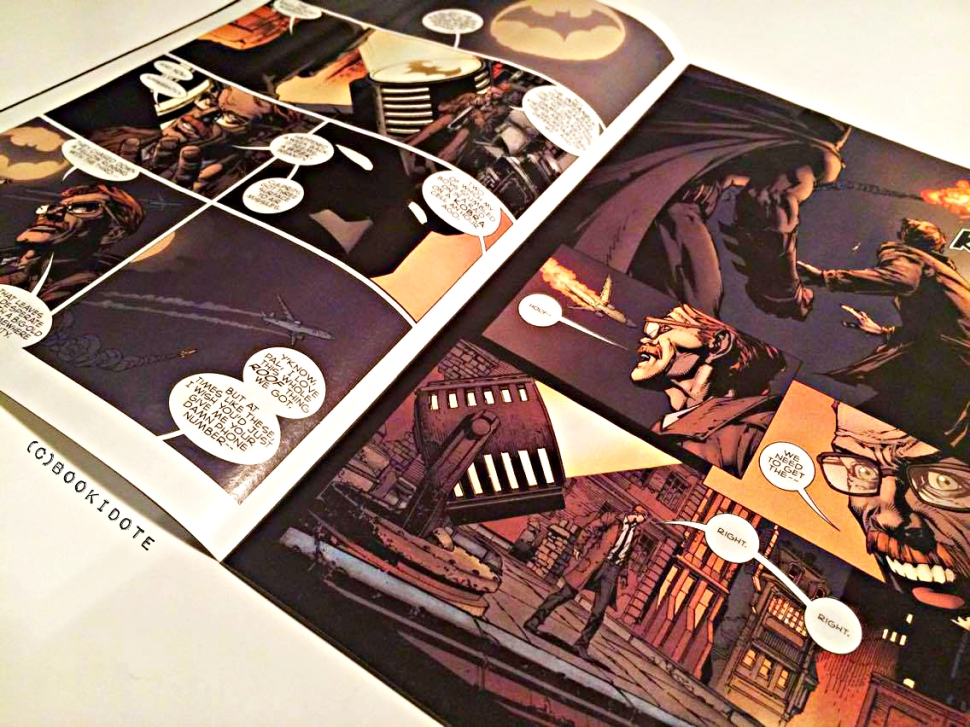 The other issue I had was how uninteresting and absolutely boring the two new Gothamite heroes were. They were introduced weirdly and they never managed to capture my interest since. I also hate their names. Gotham and Gotham Girl? Memorable? Check. Lame? Check. Their design isn’t anything that would make your jaws drop and their personalities—not sure if they even have one—is absolutely lackluster. While introducing heroes into this storyarc to challenge the idea of “To whom does Gotham belong?” had great potential, I strongly stand that it was poorly executed.

The helping hand moment in issue 5 of 6, that also turned to shit REAL quick, was no plus for this storyarc. That, supposedly big, event made absolutely no sense and just makes us wonder about so many things unnecessarily. While it could be seen as another one of Tom King’s ideas that he tossed into his pot to further explore the whole idea of Gotham and its owner, the event was atrocious and really deceiving. When I saw it happen in a flash (it honestly doesn’t even last 10 seconds), I just hoped it was some kind of dream sequence, cause otherwise, that superhero moment was a real bummer.

Honestly, the only big plus that I could give this storyarc is the artwork. Although some of the bulkier characters couldn’t stop me from thinking of The Hulk, I found the artwork quite descent. But even that isn’t enough to conjure the extra 3 stars the series craves for. David Finch usually keep the time frame at dusk (of course) with all the orange-brown-gray gradations that cover the skies of Gotham. He also does justice to all the characters by thoroughly drawing them out and by keeping the Greg Capullo’esque vibe going for this Batman run. It’s nice to see that the artwork was able to save this storyarc at least.

I hope the next storyarcs will be an improvement (I believe to be wrong about this). In fact, the series is about to get into its first crossover event with the Detective Comics and Nightwing runs. And, from the look of things, the event will be a retelling of the famous Monster Men storyarc by Matt Wagner; something that follows the Halloween spirit. The simple idea that there are multiple writers and artists working on this project scares the living shit out of me. I also have a hard time digesting the idea of having crossover events like these, as they rarely succeed. In all honesty, from what Tom King has shown me with this first storyarc, there’s only room for improvement. Even if his introduction of new unoriginal characters, his slaughter of iconic personalities and his uninspiring comedy has only gotten me to crawl to a corner and cry, a Bat-fan must stay strong and live through these dark days.

All I can do now is pray. Eventually the run should find its identity… because…

Did you read Batman (Volume 1): I Am Gotham yet? What did you think about it?

You can pre-order your copy @Amazon