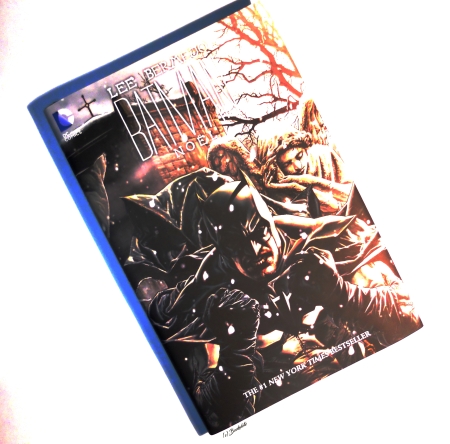 This is a gift dropped off by Santa when no comic book fan expected it under their trees. With a foreword by the great Jim Lee—another artist whose reputation precedes him—we quickly find out that Lee Bermejo’s Gotham City Christmas Carol is a tale that will go down—I’d say it has—as a classic in Batman’s universe. Batman: Noël is by far one of the best takes on the original Christmas story written by Charles Dickens. While billions of adaptations were done on Scrooge’s famous story, there’s nothing like A Christmas Carol perfectly knitted around the dark and gloomy Gotham City. Written and drawn by Lee Bermejo himself, this exquisite artistic creation presents fans with an opportunity to visit Batman’s most famous villains and friends on one of his darkest days. Struggling with his own health condition, Batman wanders building by building to capture a criminal has as escaped the grasps of the law.

If there’s one graphic novel that should be an yearly read during the Holidays, it is undeniably this one. For a person to truly appreciate this, they would in fact need to know the original story written by Charles Dickens, or at least know the main elements of A Christmas Carol. Being able to see how Bermejo brilliantly intertwines Scrooge’s story with Batman and Gotham City is only half the fun. Batman: Noël doesn’t just draw inspiration from its source material, it also dives into a character analysis of Batman. What do I mean? Simple. Lee Bermejo uses the three ghosts and Scrooge himself to show the change that Batman’s character has known. He shows us the transformation from the light-hearted and goofy Batman of the ’60s to the more darker superhero that everyone came to love in today’s culture. But this wasn’t the only change that was showcased. A much more heart-warming tale about change is also wrapped up neatly and delivered with grace by the end of the book. But this intricate moral is for you to go discover for yourself.

If the story is only half the fun, what’s the rest? The artwork. The goddamn artwork. Even if you’re not a fan of A Christmas Carol, and that having it adapted to Batman’s universe doesn’t send chills down your spine (the good kind), then the artwork alone should be a sufficient reason to take a shot at this graphic novel. This is eye candy for the Holidays. Forget about candy canes and eggnog. There’s enough in the art to get you drunk in love. I’m quite glad that Lee Bermejo had a carte blanche for this project. The designs and the style that he used to bring life to both Gotham City and the characters was so heavenly. I was truly impressed by the aura that each character he drew had. From the kind and powerful to the dark and nefarious, every single one of them was sexy in their own way. Even an impressive array of emotions was perfectly drawn into the characters, from joy to anger, sadness to fear. Nothing seems to lack in the art department. If anything, the talents of Bermejo emanates throughout Batman: Noël. This is one graphic novel that you’ll want to keep close to your heart.

Honestly, to maximize the reading experience, one has to go into it blind. The only thing you’d need is having some knowledge about A Christmas Carol. If you have that in your pockets, then don’t even bother reading the blurb or finding out what Batman: Noël is about. It was such a blast to wonder who the different ghosts were going to be and to find out how the story was going to be told. With the polished and slick artwork, it was hard to not look forward to all the Ghosts. I just knew they were going to pop out of the book with a lot of charisma and life. Furthermore, with a narrator that has a unique voice and a new character who’s probably purposely named Bob to give everyone the opportunity to identify themselves too, this take on the classic Dickens tale is a fantastic quick read. Batman: Noël is without a doubt THE story for the Holidays. EVERY Gothamite (yes, you.) has to read this during this time of the year. If you feel like indulging a beautiful adaptation of the classic Dickensian story, look no further. The Gods of Gotham have bestowed upon us the perfect story to appease that urge. Do not fight it. Just do it.

Did you read Batman: Noël yet? What did you think about it?

You can pre-order your copy @Amazon

Leave a Reply to By Hook Or By Book ~ Book Reviews, News, & Other Stuff Cancel reply