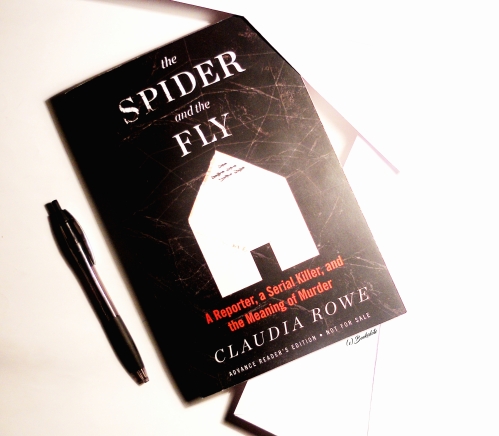 “Well, well, Claudia. Can I call you Claudia? I’ll have to give it to you, when confronted at least you’re honest, as honest as any reporter… You want to go into the depths of my mind and into my past. I want a peek into yours. It is only fair, isn’t it?”

The Spider and the Fly is a blend of memoir and true crime. You can’t help but wonder how it could be possible. Maybe the writer is the criminal? That would definitely would be interesting, but this book has something just as bewitching. This piece of literature is journalist Claudia Rowe’s first book in which she chronicles her connection with serial killer Kendall Francois. Working for the New York Times in Poughkeepsie, New York, Claudia Rowe’s fascination for the mystery behind the discovery of a serial killer who is arrested for the murder of eight prostitutes stashed in the attic and the basement of his home has brought her to embark on an ambitious and dangerous adventure. In fact, her curiosity brings her to maintain a four year mail correspondence with a serial killer behind bars. While her decision to decipher a serial killer’s motive to take lives also brings ruin to her own life, The Spider and the Fly discloses a journalist’s road to self-discovery and her attempt to understanding her deepest pains and passions.

Media loves to point their spotlights on criminals and learn anything and everything about them. Being able to extract a bit of information that had never surfaced before is a moment of glory for plenty of journalists. After all, we’re all human. We seek for answers where every thing is blurry and incomprehensible. Finding answers to our questions is what drives a lot of our actions. Kendall Francois’ life-course is one of those mysteries that drove Claudia Rowe to contact him. This killer had a past that made him stand out from everyone else. Not because he had criminal behaviors since his young age or because his childhood was filled with hate and violence. Simply because his size and ethnicity made him stand out from every other person in his neighborhood. It’s his sudden drift to picking up prostitutes, to trying to make them clean and then to draining the life out of them by holding their necks with his giant hands that causes many to wonder on his motives. Desiring to find answers, Claudia Rowe commences a mail correspondence with this killer, trying to get him to talk to her as a person who’s more than just a journalist.

While the book isn’t in the form of an epistolary, Claudia Rowe does however tease us with excerpts from their letters. Her writing does commend a round of applause as it does a magnificent job in installing an eerie and suffocating atmosphere. While often sharing her thoughts on the events that unfold during their communication, she brings to light a lot of her own past and the problems she has once had with the people in her own network. I had some trouble with the way the author transitioned from a moment from the past to one in the present, as it felt too sudden and sometimes simply killed the flow. While it took some getting used to, the story still managed to cover as much on the life of both key characters as possible. The most unsettling moments in this book where the constant self-analysis by Claudia Rowe that lead her to sometimes see herself as one of the victims of Kendall Francois or to even relate similarities between her past and the serial killer’s. Her hunt for answers and her attempt to befriend a killer (or at least pretend for the sake of establishing a connection with him that will open him up, figuratively) are the driving forces of the whole journey told by the author. Even if Kendall Francois requires Claudia Rowe to unveil her life to him as genuinely as possible if she wants him to do so himself, the struggle of the journalist to do something that she knows seems repulsive to the eyes of others doesn’t stop her from playing the game and potentially find herself in a deadly trap.

Readers who expect The Spider and the Fly to satisfy their cravings for a pure true crime will surely not find everything they desire in this. This book explores a journalists attempt to understand her own darkness through her exploration of a serial killer’s. While the book leaves you with more questions on both Claudia Rowe and Kendall Francois, it also shows you that answers are not to be found whenever we fancy them. Diving into this game with a serial killer has costed her her own personal life and brought her to lose a lot in the process. Although the damage to her own life were visible, she persevered and continued to knock at the doors of teachers, friends, and the family of the victims in search of the trigger that could explain everything. Claudia Rowe also conveys the story of Kendall Francois’ family since they also lived under the same roof that held all the rotting bodies for years. Wondering how the family never wondered to check on the nasty smell of corpses, countless questions on Kendall Francois’ life arises from the dark. Buried in questions that are often gone unanswered by the killer himself or simply ignored, one can’t help but search in the past for something that could explain the trajectory of a killer who was often referred to as a giant and kind bear. 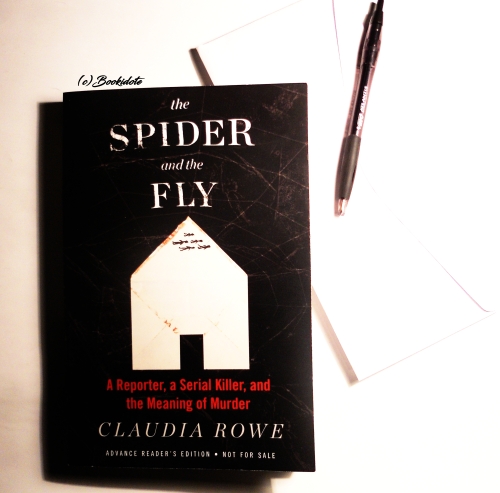 Kendall Francois is not the typical serial killer that you find in your fair share of fiction. His actions are incomprehensible and his ways are not meticulous or planned. It doesn’t however take away anything despicable from his acts. The book doesn’t sly away from making his every presence a menace and a giant threat to Claudia Rowe’s own life. With a beautiful in-depth analysis of the journalists past and self, The Spider and the Fly is an exploration of a provocative and dangerous relationship between Claudia Rowe and Kendall Francois. While a tiresome game of power and control envelops their every contact, their relationship also leads the protagonist to understanding what drives her to find fascination within anything close to danger since her childhood. This combination of memoir and true crime is a thrilling and excellent piece that portrays the ugly in all its raw form. The best part of this book is not about getting the answers to the questions we ask. It’s about the process of hunting for answers and all the enlightenment that you get from it.

THANK YOU TO HARPERCOLLINS CANADA FOR SENDING ME AN ADVANCE COPY FOR REVIEW!

Are you interested in The Spider and the Fly?

You are, you say?

You can pre-order your copy @Amazon Canada