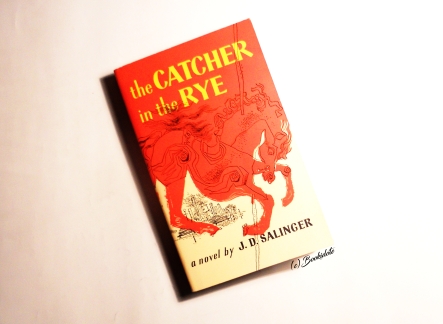 “Anyway, I keep picturing all these little kids playing some game in this big field of rye and all. Thousands of little kids, and nobody’s around – nobody big, I mean – except me. And I’m standing on the edge of some crazy cliff. What I have to do, I have to catch everybody if they start to go over the cliff – I mean if they’re running and they don’t look where they’re going I have to come out from somewhere and catch them. That’s all I do all day. I’d just be the catcher in the rye and all. I know it’s crazy, but that’s the only thing I’d really like to be.”

— J.D. Salinger, The Catcher in the Rye

Everyone is a goddamn phony. It’s almost impossible to finish this book without having that sentence engraved in your thoughts, forever. The Catcher in the Rye was one of my most surprising reading experiences yet. It’s not your conventional young adult story. It is a book that has known censorship before embracing immense fame. It’s popularity grew at an exponential speed and ended up getting incredible praise among teenagers. How? It was all in Holden Caufield, the protagonist of The Catcher in the Rye, and how so many adolescents were able to relate with him. This story is a glimpse into the life of Holden Caufield. He narrates the events, one after the other, and puts forth his entire thought process in black and white. After learning that he once again got kicked out of high school, Holden Caufield decides to follow his gut feeling and takes a trip to New York City. Through these events, readers uncover a child who’s simply falling into adulthood. In this story marinating in a theme of coming of age, Holden Caufield is an elegy for adolescents. It’s through his confusion, his angst, his pain, his pleasures and his desires that we see his struggle to remain a child, yet swimming in a world of adults.

As I was reading, I thought I was going to end up hating this book. Everything about it seemed to be paving the way for the hate to roar out of me. There’s no exposition, there’s no climax, there’s no denouement and there’s no ending. The whole book is a sequence of actions told through the voice of Holden Caufield and his particular writing style. His hypocritical behavior, his cynicism, his repetitive language, his sarcasm, his swearing and his ability to digress are all there to strain you and build your patience for this character. You wouldn’t believe me if I told you the number of times he might have gotten on my nerves. Just his abusive use of “that killed me” would give me a brain aneurysm. Although it was somehow compelling to read about Caufield’s thoughts on a person or on a thing in particular, you always felt like he wasn’t leading you anywhere. His ability to digress is absolutely stunning. He could see a person at a bar and end up bringing you on a journey through memory lane. It’s only after finishing The Catcher in the Rye that it hit me. I actually did enjoy this. I actually did appreciate the thoughts of Holden Caufield and the way J.D. Salinger delivered this cynical child’s story. I actually did understand what Holden Caufield was going through. I felt like I had told parts of my own childhood to him and fell in this trap of getting attached to him. In the end, Holden Caufield was right. “Don’t ever tell anybody anything. If you do, you start missing everybody.”

Holden Caufield is without a doubt the biggest phony out there. But why he is such a person is where things become so much more interesting. There isn’t a moment throughout the book that you won’t see him pointing fingers to every phony out there. Even in today’s society, there’s no denying the number of people who put on a farce and pretend to be someone they’re not or say things that they don’t honestly believe in. Even if Holden Caufield is able to see through these people, making it even more obvious that his adulthood is catching up to him, he does the exact same thing throughout the book. In fact, he blatantly admits to being one of the biggest liars out there. But it’s this irony and this contradiction that makes his adolescent self so intriguing. The way he perceives life brings him to alienate himself from the world and not bother with people who can’t stay true to themselves. In fact, I found that Holden is a strong believer of talking from the heart, of saying things that bring your excitement and leaves you in a peaceful trance. But what he believes and what he does are two completely different things, since he too has difficulties expressing himself or even a disinterest to do so. Holden Caufield is a very complex character who’s easily seen by many readers as a rebel who doesn’t want to do things that he doesn’t feel like doing. His desire to live in the present and to do things that simply pop into his mind makes his adventures so spontaneous.

It’s heartwarming to see Holden Caufield want to preserve the childhood of every kid out there. Without explicitly saying so, you can tell from his behaviors and beliefs that it is something very important for him, especially when he’s starting to realize that he had already fallen off the cliff. His wish to be that person to stop others from falling off the cliff into adulthood is something that can easily strike a chord among readers. Even if Holden Caufield remains the biggest phony in this story, he somehow managed to make me like the guy. The Catcher in the Rye has been a controversial novel that has managed to join the list of banned books in history. It’s depiction of a cynical teenager who tackles themes of sexuality, drinking, profanity and many other things has made this a book that could stir the morals and values of a lot of individuals. Just to make it even more shocking, I’ve read that this book has even made the headlines alongside killers. The biggest story related to The Catcher in the Rye is the death of John Lennon. Mark David Chapman, the infamous killer who took Lennon’s life, was arrested with a copy of this book bought on the same day he killed him. Inside the book he left this note: “To Holden Caufield, From Holden Caufield. This is my statement.” Now, is being able to relate to the character a good or bad thing? I’ll let you find out.

There isn’t any directors out there who have attempted to adapt this book onto the big screen. It would definitely have been way too complicated. In fact, it would have most likely failed to capture the essence of this book (especially the narration). However, there was a movie that was recently released that draws inspiration from the book and even includes the author into the story. I haven’t seen it however. If you have, let me know what you thought about it!

Are you interested in The Catcher in the Rye?

You are, you say?

You can purchase your copy @Amazon Canada