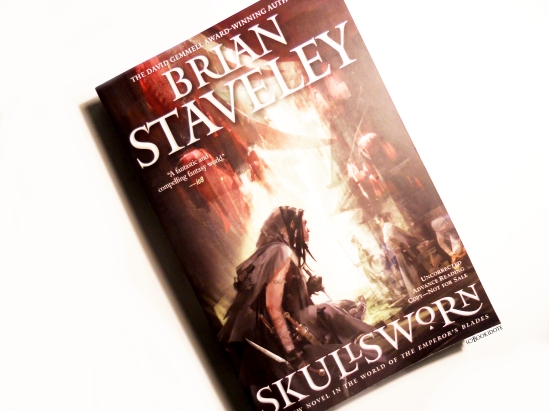 “Give to the god the one who made your mind and body sing with love.”

Skullsworn is a stand-alone story set in the same universe as The Chronicle of the Unhewn Throne written by Brian Staveley. Although having failed to get around to read the original trilogy that laid the foundation to Staveley’s popularity, I can still confidently confirm that Skullsworn remains a beautiful introduction to a great talent in the fantasy world and can easily be read without worrying about the potential references it could have to The Emperor’s Blades, The Providence of Fire or The Last Mortal Bond. This new tale features Pyrre as the main protagonist and recounts her Trial to officially arise as a priestess of Ananshael, God of Death. Presented with a song that unveils the very requirements to become a priestess, Pyrre embarks on an adventure in her hometown of Dombâng in hopes of completing the challenge under the eyes of two Witnesses, long time priestess and priest of Ananshael: Ela and Kossal. While the song instructs Pyrre to bestow death upon seven specific individuals, Skullsworn exposes us to the ramifications of love, and the deadly edge to it.

The story is told in the first-person through the eyes of Pyrre as she slowly, but surely, attempts to complete her Trial under the watchful eyes of her two companions. Feeling a complete devotion to the God of Death, Pyrre’s thoughts and actions transpires with a relentless love for the concept of death and the work of her God in the every day life. Blinded by this faith to her one and only God, Pyrre believes that killing comes easy for her, but that the real challenge remains in the last verse of the song which requires from her the unknown: love. Within fourteen days, she is to fall in love and to take the life of her beloved, and nothing frightens her more than to realize the colossal task that reigns upon her. It is in hopes of finding that special someone that she and her Witnesses set about to Pyrre’s city of birth.

Although her journey remains action-packed from cover to cover, I had issues with her personality, and her character as a whole. In fact, I honestly had trouble caring for her character at times. She emanates with this very cold and disconnected personality, and, through her thoughts, attempts to disentangle her limited comprehension of love in a very rational and down to earth manner. I believe it’s the very premise that a person is to fall in love within two weeks that caused me to feel a little bit perplexed by the character’s development. I guess my own conception of love muddied the waters and struggled to appreciate the story that was conveyed. However, the progression of the story, and ultimately, the conclusion made me realize that the whole point of this adventure is to draw a character who basically never truly understood love and who was going to find out the underlying layers of it the hard way.

While my ability to connect with Pyrre remained hectic throughout the story, the supporting cast succeeded in doing a much better job in holding onto my attention. It is impossible to go on without giving Ela the spotlight in being, in my opinion, the most bad-ass character in this tale. Her much older and wiser personality—around her 30s—glowed with a free-spirited, spontaneous, sex-and-alcohol addicted drive. While the banter between most of the characters in this book felt rapid, sharp, witty and aggressive, Ela radiated with the most entertaining dialogues of them all, and almost always had the last word in every discussion. Her retorts were repeatedly filled with humour and made me chuckle at times. On the other hand, Kossal remained the much older and quieter Witness who seemed to live within a bubble ready to explode with anger and disdain for the world. In the end, the chemistry between the characters were absolutely genuine and stayed true to each character’s personality.

Skullsworn‘s forte lies in its world-building however. This is one story that heavily, and marvelously, strives in telling a story set in a unique world filled with its own history, myths, religions and people. The detail is incredibly rich and poetic, as Brian Staveley’s writing is majestic and endlessly lyrical. I strongly believe that the main attraction of this story is in the complex and authentic world that the author draws up for us. The details in the landscape, in the myths that forged every society and in the traditions and customs of every religion and village, all come full circle and give life to a world filled with festivities and dangers. I thoroughly enjoyed learning about all the gods that once existed and the ones that still shape the life of countless mortals. Brian Staveley has a minute and compelling way to integrate information on the world and keep readers mesmerized by its mere complexity.

Skullsworn is filled with lots of blood and killing, but love remains the core of this story. Even around the roars of jaguars, the slithering of snakes, the deadly patience of crocodiles and the sinister eyes of spiders (!), Brian Staveley interweaves Pyrre’s journey to understanding love in all its shapes and forms. Driven with a deep desire to become a priestess of Ananshael, her strategical and logical reasoning will not help her decipher love. During this Trial, her understanding will come hit her like a hurricane and deliver a stunning finale to this epic stand-alone story. It is with a brilliant stroke of the pen that Staveley blends theological discussions, artful action sequences and in-depth analysis of love and death in a giant ravishing pot of epic fantasy. Learning about the pantheons of gods that exist in this world and how they served the people in their decision-making, as well as how they helped build villages with individuals subscribed to various competing faiths was a thrill to learn about. Complemented with the constant bantering and verbal sparring between the characters, Skullsworn is a compelling world that will only feed your desire to read more of this world. Upon completing this story, I know what the gods ask of me now.

Next stop, The Emperor’s Blades.

THANK YOU TO RAINCOAST BOOKS AND TOR FOR SENDING ME A COPY FOR REVIEW!