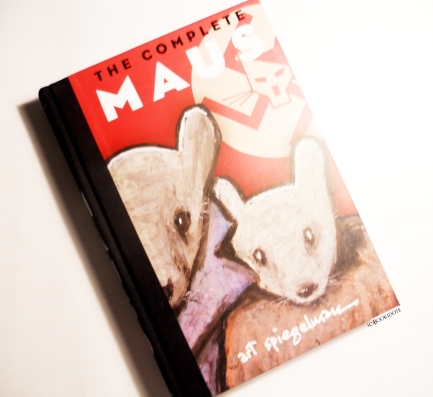 “No, darling! To die it’s easy… But you have to struggle for life!”

This is a dreadfully moving narrative that shines through the many dichotomies of life. The Complete Maus is not like anything you’ve read before. Containing both Maus I: A Survivor’s Tale: My Father Bleeds History as well as Maus II: A Survivor’s Tale: And Here My Troubles Began, this volume recounts the story of Vladek Spiegelman and his wife’s perseverance and ruthless ordeal through one of the darkest times in history: the Holocaust. Art Spiegelman also interweaves his own story as the son of a survivor and the impact of a dark and twisted historical event on his generation. While exploring the comic medium in all its subtleties, The Complete Maus dives deep into the struggles of every day life and sheds light on the complexity of trust, of survival, of fear and of guilt. It is a inter-generational look into the heart-wrenching and horrendous events pertaining to World War II and the weight that individuals carry since its end. 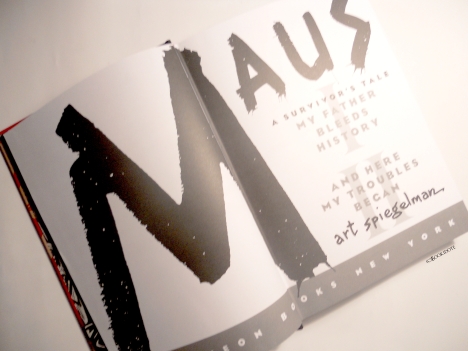 The story revolves around Art Spiegelman desiring a in-depth look into the miserable and inhumane times that his father Vladek Spiegelman’s had to endure during the rise and fall of Nazis, in order to draw up a comic book story to share with the world. Shifting between past and present, readers are acquainted with the slow yet disastrous disappearance of peace, as well as the hardships and deaths that followed the radical change in the political landscape. The alternating narratives gives us a shocking look into the repercussions of the war on Vladek, as well as Art’s generation’s inability to connect with their parents. The guilt that arises in both character’s is however the most stunning and thought-provoking element of this story, as Vladek struggles with a survivor’s guilt, while Art struggles with a guilt soaked in a difficulty to connect and comprehend his father due to not having lived through World War II. It is in these moments that you see how this story manages to not only convey a Holocaust story, but to shape the fallout of the war on an individual level that affects multiple generations.

The Complete Maus is also strong on metaphors with each nationality being represented by a different animal.  Therefore, Jews are drawn as Mice, Poles as pigs, Germans as cats, Americans as dogs and so much more. This raw depiction of individuals helps in conveying the story in a more collective rather than individual perspective and adds shock value to the events that unfold towards certain groups. Animal masks are also integrated into the story as they help in displaying the sheer necessity of hiding your true identity in order to avoid persecution during those times. If you think this would be an easy read, you should think again. The black and white artwork thrives in hammering into the readers the brutality and thickness of the tragedies, and dissolves the horrors into a much more tender and digestible substance. It will take some getting used to, but as you devour every page, the artwork quickly grows onto you and will eventually draw upon your emotions to deliver its story in all its cruel warmth.

If there’s anything that will stand out from this book, it is its unparalleled story-telling. This is not just another World War II story highlighting the Holocaust and all the misery and chaos that came with it. This is the story of several generations during one of the darkest times of history. It is a cartoonist’s journey to discovering his aging father’s odyssey and the highlighting of a intricate relationship between two generations. I have to say that this graphic novel covers so much ground, that it’s simply astounding. The Complete Maus brings us a black and white tale that reveals the repercussions of inhumane acts, the tumultuous relationship between individuals, whether it is between family, friends or nations, and the potential of comic books in conveying powerful narratives. By brilliantly jumping back and forth between the past and the present, The Complete Maus delivers one of the most beautiful stories out there. It is heart-warming and disquieting at the same damn time. This is a classic that everyone should give a shot.

How about you read this graphic novel for yourself!