Summary: Before she was Wonder Woman she was Diana, princess of the Amazons, trained warrior. When a pilot crashes and tells of conflict in the outside world, she leaves home to fight a war to end all wars, discovering her full powers and true destiny.

Directed by Patty Jenkins, Wonder Woman (2017) presents us with the most successful female-lead superhero movie to date. While the DCEU has been bullied since its debut with Man of Steel (2013) and has known nothing but hate from countless viewers and critics, Gal Gadot (known for her role in the Fast & Furious series) pummels her way to triumph with a well-crafted story, well-rounded characters, adequate setting and a memorable and timely message to leave the theaters with. Wonder Woman (2017) is an origin story told right after the events of Batman v. Superman: Dawn of Justice (2016). Born and raised on the island of Themyscira where all the Amazons live, Diana Prince is raised under the guidance of her mother Hippolyta (played by Gladiator‘s Connie Nielson) and aunt Antiope (played by House of Card‘s Robin Wright).  While her mother tells her stories about her father Zeus and the evil of Ares, she also forbids her daughter to embrace the life of an Amazonian warrior. Antiope however believes that Diana’s destiny is much bigger than what other’s want for her and offers guidance and training. High-spirited, hope-filled and driven, this is how a little girl fights for what she believes in.

As she grows up and quickly becomes an unstoppable force, her world is suddenly cracked open with the arrival of Steve Trevor (played by Star Trek‘s Chris Pine). His crash landing brings Diana Prince to her first encounter with the outside world, especially men, and brings him to inform her of a war (World War I) that she strongly believes is the doing of the god of war Ares. Thus, Diana and Steve are set on a journey to end this war. Although the focus remains the restoration of peace for humanity, this movie offers us so much more with the loss of innocence in our soon to be member of the Justice League. Packed with phenomenal CGI-heavy action sequences, outstanding performances by lead star Gal Gadot and co-star Chris Pine, excellent supporting cast with their perfect comic relief and a solid as well as clever story to better understand our favourite princess of the Amazons, Wonder Woman (2017) is the DC movie to keep all the haters quiet and to make all the fans squirm in ecstasy.

Gal Gadot was without a doubt an excellent and perfect selection for the role of Wonder Woman. Not only is she stunning and draws the attention of everyone under any disguise, she also embodies hope, joy and innocence in one nifty and complete package. Having played very few roles in Hollywood movies, doubt could only crawl its way into my mind when it comes to her acting skills. It was a pleasant and wonderful surprise to see how she brilliantly played her role as Diana Prince in Wonder Woman (2017). Throughout the movie, it felt like we were presented with a child that was finally released into the outside world for the very first time without any prejudice or negative experience to taint her views. Her first impressions of everything were always so cute and genuine. I mean, one of my favourite scenes, taken straight out of the comics, was Diana Prince discovering ice cream. ❤ However, a lingering after-thought would always pop up and remind you how devastating the truth will be on her when the time comes. It’s easy to think that this movie would come out with a feminist agenda, but in the end, with the help of excellent writers, a perfect director and outstanding actors, the movie served not as women empowerment, but humanity empowerment. In Wonder Woman, everyone can find hope, strength and virtue.

You’d think that Chris Pine wouldn’t have enough focus throughout the movie with Wonder Woman being the main character, but things worked out quite well for his character. His modesty and ability to prioritize the world before himself shines throughout the movie. His chemistry with Wonder Woman is astonishing as they share countless important dialogues together and leave us pondering on important every day subjects. One of my favourite scene was definitely the one we get early in the movie as they sail their way out of Themyscira. If anything, it was an absolutely golden moment. Unfortunately, one of the parts that less appealed to me was around the finale with a cheesy as hell goodbye sequence we get as Wonder Woman finally remembers what Steve Trevor tells her before he sacrifices himself for the greater good. While it was too much for my taste, it was also the perfect and only direction the movie could’ve went. I do have to say that I loved the whole “It’s not about deserve, it’s about what you believe” bit as it has been something I myself have always preached about. I loved how they conveyed that message and how powerful it was in the rise of Wonder Woman and the death of her innocence. 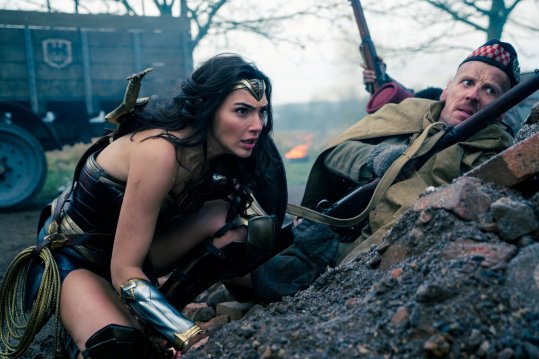 The supporting cast was also amazing and rarely ever made me cringe. The humour that they produced helped alleviate the darker tone of the movie at a steady and perfect rhythm. From Steve Trevor’s secretary Etta to Sameer the spy, you just couldn’t help but indulge the comic relief and embrace the joyous sequences during a time period that was filled with misery and death. I also loved how Diana Prince’s own innocence and sense of exploration plays a big role in delivering humour throughout the movie. If there’s anything to retain from this movie, it’s definitely that we can trust Patty Jenkins to direct a fantastic Wonder Woman movie without worrying about the execution. While the humour played in contrast with the darker tone of the movie, there was also a beautiful, uplifting and clever play with colors throughout the movie thanks to Wonder Woman’s armor. You just can’t help but relish those moments when the spark of bullets on armor and shield enhances the red, blue and gold of her armor and creates a truly admirable eye candy out of Wonder Woman. How her colors shine brighter in an environment so dark and sinister just simply enhances the ray of hope that she brings to this world.

Now, the big question that usually haunts a lot of superhero movies: Are the villains worthy and well-developed opponents? Wonder Woman (2017) offers with a ruse with the presentation of Doctor Poison and general Ludendorff as our main villains. As Doctor Poison develops a deadly hydrogen-based gas that simply can’t be stopped and Ludendorff inhales an unknown strength enhancer (was it an origin teaser for Batman’s longtime villain, Bane?), Wonder Woman attempts to hunt down the general believing that he is the god of war in disguise and Steve Trevor attempts to stop the release of the deadly gas that would have killed countless innocent individuals. The revelation that the god of war was actually Sir Patrick was an excellent plot twist, but I think the impact was less impressive on me as I had a feeling that the actor (David Thewlis, also known for his role as Professor Lupin in the Harry Potter series) would have a bigger role than what we were brought to believe. From the moment he appeared in the bar wanting to be in on the plan, I just knew something was off with him.

Nonetheless, the revelation was perfect and his monologue explaining himself as the god of truth was fascinating and splendid. There’s actually no other character development that could’ve been done for the god of war Ares too. He was initially presented as a myth and a god that played with the minds of humans, and was kept a secret for Diana Prince to discover for herself when the time was right. Using Doctor Poison as a bait to transform Wonder Woman into a killer who won’t ever believe in the good of people anymore added to both Ares’ development and penultimate plan, as well as Wonder Woman’s transformation. In the end, the villains in this movie were developed as much as necessary and nothing more was needed. The villain department is definitely one that can be checked off as a success in this movie.

The action scenes in this movie were just mind-blowing. I felt like a little kid watching them. There were teasers and foreshadowing for combat strategies very early in the movie that get used at absolutely epic moments later on in the movies too. While a lot of the scenes were enhanced with CGI, there’s not a single moment that your jaw won’t be on the ground and your eyes wide open at the brutality and majestic touch to the fighting style. From the No Man’s Land scene to the shield-jump-to-obliterate-a-sniper scene, Wonder Woman (2017) nails the action sequences with absolute grace. The final battle was one that was filled with CGI as well, the kind of scene that would stir some controversy among critics. If you ask me, the decision to do it so was excellent and well-justified. We’re talking about Wonder Woman after all. She has never been about mortal villains who don’t have powers or what not. A battle with Ares deserved exactly what we got. I have to say that I also loved the design they went with for Ares’ armor and the way he delivered his monologue while bringing forth chaos. Even if Wonder Woman destroys Ares with extreme ease after realizing what Steve Trevor does for the world, you can see that it was a moment of self-discovery that was being put under the spotlight.

Wonder Woman (2017) is definitely among DC’s best superhero movies out right now. It surpasses expectations and delivers a solid movie that knew exactly what it wanted to tell. While it is an origin story for Wonder Woman, it is also a movie that showcases what the princess of the Amazons stands for and how she learns about her own purpose in the world of mortals. Gal Gadot will probably go down as the best portrayal of Diana Prince in the history of superhero movies, and one can only be excited to see her reprising her role in future DCEU movies. While you initially wonder why DC decided to release Batman v. Superman (2013) before all these origin movies, I’m starting to think that this strategy might also help in building our attachment to the characters and add some replay value to past movies. I know I’d want to see Wonder Woman’s first appearance again now that I know what she’s been through before. Can we also give a round of applause for that iconic Wonder Woman score that was initially used in Batman v. Superman (2013) making a timely and perfect appearance in Wonder Woman (2017)? Definitely sent shivers down my spine.

Have you read the comics? Did you see the movie yet?