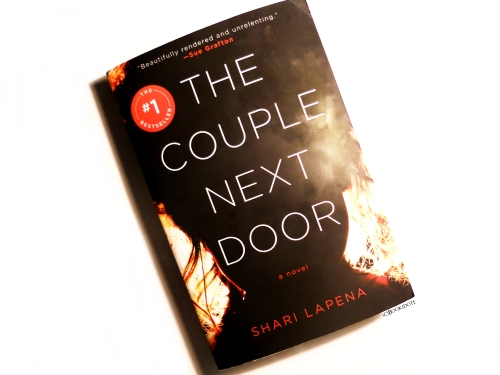 “It’s only when the dream is over that you see how odd it all was, how it actually didn’t make sense at all.”

— Shari Lapena, The Couple Next Door

The Couple Next Door is one of the most wildest story that occurs within just a couple of days. This debut thriller by Shari Lapena offers fans a captivating yet highly insane whodunit featuring a couple and their infant. On the night where both Anne and Marco go over to their neighbours for a little dinner party, the two of them decide to leave their child in its crib while bringing with them a baby monitor to keep an eye out for trouble. It’s by keeping in mind that the neighbours really wanted a baby-free night, that our married couple leave themselves open for a nice little disaster that will cunningly sneak its way into the dark and into their house. Past midnight, our highly confident couple decides to return home only to realize that their worst nightmare has come to life: their baby is gone. As this marks the end of chapter 1, The Couple Next Door will promise you with a paradise of twists and turns to satisfy the most gluttonous of thriller fans in this undeniable page-turner.

The writing style wasn’t the most mind-blowing aspect of this debut novel. In all honesty, it was neither bad or good. If there’s any way to describe it, I would say that it was written like a screenplay with everything told in third-person. The convenience of an omniscient godlike narrator is that the multiple point of views that are presented, all written in a simple third-person writing style, offers readers insight into what the characters are feeling and thinking. The less appealing element of it all is that Shari Lapena also spells out every possible theory and hypothesis that the reader could possibly imagine with each character always ending up sharing their thoughts on who did the kidnapping and why anyone would want to do such a thing. This is definitely unfortunate since readers are never given the freedom to really devise their own speculations or even to read between the lines. However, you’ll quickly get used to the style and find yourself captivated by this urge to find out which one of these spelled out theories will come out true by the end of the story. The Couple Next Door has definitely delivered a pretty unique narrative by remaining extremely enthralling, yet keeping everything less creative and mind-blowing for the reader. It’s definitely an odd combo, but at the end of the day, it worked.

As you learn to adjust yourself to the writing style and find yourself immersed in the intrigue, it’s upon reaching the 50% mark that things sort of go downhill. Once you reach that point, Shari Lapena unleashes an avalanche of twists one after the other and really obliterates the level of realism to the story. In fact, that is when the story starts to unravel and all the lies, deception and manipulation games are scrutinized openly. You’ll feel like things escalated really fast when everything seemed so normal at first. Upon reaching the end and reflecting on the countless events that occurred throughout the book, you’ll realize that the odds that such a story could be remotely plausible is so slim, it’s almost impossible. However, here’s the tricky part. The Couple Next Door was just so fast-paced and insane that it ended up being addictive and quite amusing at the same time. I’d qualify this book as the fast-food of literature. You know it’s bad, but you just can’t help but enjoy it.

Even if the story was borderline inconceivable, the characters remained interesting and deceitful. As the hunt to find the kidnapper and to retrieve the lost baby continues, characters will slowly fall into a trap, a trap that involves paranoia, manipulation, betrayal and blame. Every character will corrupt themselves with unnecessary thoughts, reckless actions and ridiculous levels of distrust. The detective in charge of the case will also add additional pressure onto these characters and bring forth everyone’s backgrounds and the things that they’ve kept hidden from each other. One thing’s for sure. Shari Lapena does an impeccable job in bringing out the worse out of everyone in The Couple Next Door. This debut thriller is a relentless psychological thriller that will unquestionably keep you flipping through this book no matter how far-fetched it seems to get. This is one snowball that only knows one direction and won’t stop till it reaches the bottom of Mount Everest. Forget about savouring this meal, you’ll find yourself gulping The Couple Next Door in one huge bite.

THANK YOU TO PENGUIN RANDOM HOUSE FOR SENDING US AN ADVANCE COPY FOR REVIEW!