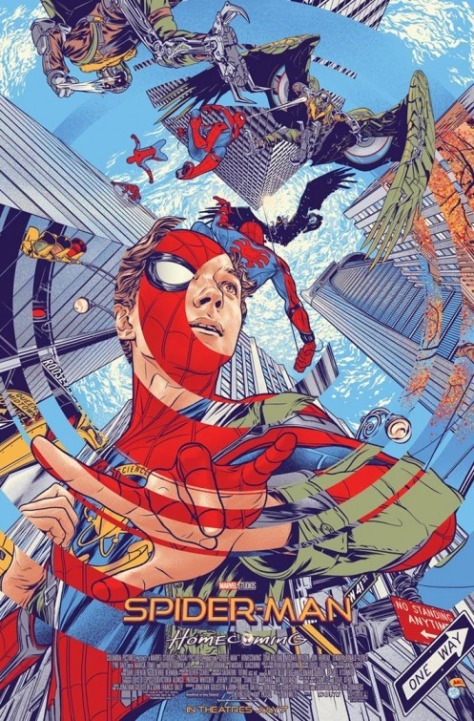 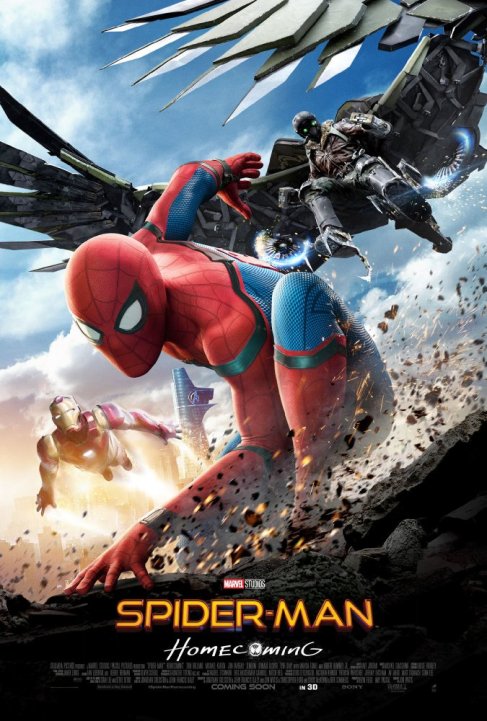 Summary: Several months after the events of Captain America: Civil War, Peter Parker, with the help of his mentor Tony stark, tries to balance his life as an ordinary high school student in Queens, New York City while fighting crime as his superhero alter ego Spider-Man as a new threat, the Vulture, emerges.

Spider-Man returns to the big screen with its second reboot within two decades. After a controversially badly-written The Amazing Spider-Man featuring Andrew Garfield as our friendly neighbourhood superhero, all the pressure in the world was on Tom Holland to raise the bar and deliver a MCU-connected Spider-Man who’ll bring the much-needed hero side-by-side with some of Marvel’s greatest heroes. The real question is if Tom Holland’s performance will deliver a stunningly superior Spider-Man than what we got from Tobey Maguire. Without much of a surprise, Spider-Man: Homecoming manages however to do exactly what we all expected from it based on the hero’s 10 minutes of fame in Captain America: Civil War. Its pure jolly and light-on-its-feet action surges onto the big screen in an exhilarating and beautiful fashion and offers us a teenager who’s being thrown in the world of adults and needs to learn the ins and outs before moving forward. Without being stagnant and repetitive by going through the same origin story that the whole world should know by now, this Spider-Man movie draws us right into its story about responsibility and identity.

Sharing Spider-Man’s debut in the Marvel Cinematic Universe is an ensemble of characters part of Iron Man, and including the billionaire himself. While at first his presence sounded like a thunder-stealing inevitability, it turned out to be a bonus appearance, but not an indispensable integration. In fact, Tony Stark serves as a great father figure/mentor who dishes out the life lessons in doses throughout the movie for Peter Parker to learn about the perks and responsibilities that comes with his suit. Having to face off his first true villain after receiving his suit from Tony Stark, Spider-Man finds out that The Vulture is no simple threat. Delivering us a stunningly colourful and web-filled action-packed movie, Spider-Man Homecoming is a beautiful rendition of our friendly neighbourhood superhero and serves as an excellent prologue to a sequel that couldn’t come any faster.

Let’s just say it. Tom Holland is a brilliant Peter Parker and Spider-Man. The teenage nerd who tries to integrate the cool kids club was brilliantly done, while the teenage superhero who has yet to understand his own strengths is even more outstandingly executed. Spider-Man: Homecoming also balances both settings, high school and the streets, and throws us off the roof, into the sky and underwater with as much adrenaline as a man can handle. Let’s not forget that we even get to visit Washington D.C. with our favourite webslinger. I loved how the movie even explores the heroes friendly neighbourhood superhero qualities very early on. Spider-Man has always been the type of kid who’d save a cat out of a tree and feel greatly accomplished and the movie does an impeccable job at showcasing it. If anything, Spider-Man belongs to the Netflix Marvel Universe, alongside heroes like Daredevil. However, Peter Parker will always want to do more and be of use to everyone, especially at the age of 15. There’s a reason why we got Iron Man featured in this movie. In fact, Spider-Man should theoretically be by the side of absolutely every Marvel hero here and then. I definitely couldn’t be more happy to see him part of the MCU now.

I thought it was great directing by Jon Watts by skipping both Spider-Man’s origin story as well as the heart-breaking tale that surrounds Uncle Ben. Although we do get a quick reference to the event, there wasn’t a second more spent on the issue as the movie quickly dived into high school drama as well as Avenger membership dilemmas. Instead of getting the iconic Uncle Ben moment about responsibility, Tony Stark takes the torch and plays the role of a living and slightly absent mentor. The classic mantra takes a different form and even appears at one of the movies best scene. Spider-Man under an insane amount of rubble? Seeing the kid in Spider-Man squirm for help and find strength through the words of Tony Stark was phenomenal. I have to say that Stark seemed slightly odd in this movie. It’s as if he suddenly became much more mature compared to his earlier days, or at least pre-Civil War. I guess war does change Man. Nonetheless, his words serve as a great catalyst in Spider-Man’s progression. Character development remains the movie’s forte, and probably the main focus as well. This was definitely expected, but it was the execution that remained a mystery until now. Spider-Man: Homecoming succeeds in transforming Peter Parker/Spider-Man from boy to man by the end of this movie in a heart-warming manner.

Nowadays, it’s almost impossible to go through a superhero movie without wondering if the villain will get the right amount of screen time and development. But if you cast Michael Keaton as The Vulture, expect to get the best villainous experience possible. No kidding. I’ll even say that The Vulture is currently Marvel’s best villain in the MCU (excluding their TV shows). I’ve always loved this man’s acting chops and he’ll definitely go down as one of the best Batman’s out there too. I was truly impressed by the performance he put up as Adrian Toomes/The Vulture though. His life was shaped by vengeance towards the Avengers and the impact they had on him on a financial level as making a living in construction became near impossible. The Vulture was definitely a brilliant pick for Spider-Man’s first villain as the challenge is up to par with our webslinger’s current skill set. You have to admit that the big plot twist when Peter Parker goes to pick up Liz was one of the most shocking moments of all time in Marvel’s movies. I loved how unexpected it was. My mind was racing with thoughts on what the hell was going on until it clicked. But the father to daughter’s boyfriend talk in the car was definitely what really pushed Adrian Toomes’ character to greater depths. The rivalry between Spider-Man and The Vulture was pushed to such an intimate level, that the stakes became crazy high for Spider-Man. I simply loved it. Brilliant story-telling.

Spider-Man and The Vulture were however not the only highlights in this movie. Aunt May, played by the beautiful Marisa Tomei, delivered some great moments with her modern-motherly tips and tricks. While she isn’t exactly the Aunt May I’ll always have in mind, she definitely didn’t give me any reasons to hate her either. Ned was however an excellent best friend to Peter Parker and always managed to lift the mood at unexpected moments. Now, what however failed for me is Flash Thompson played by Tony Revolori. As much as the approach they went with was interesting, it simply didn’t capture the bully I’d imagine Flash Thompson to be for Peter Parker. Even Peter Parker’s reaction to this Flash’s intimidation felt underwhelming and unimportant. I honestly would’ve preferred if they had kept the high school football giant and kept some of the much more natural bullying we all know and hate. Michelle, played by Zendaya, was also another character that just turned out extremely awkward on screen. I had more WTF-moments with every one of her scenes than anything else. Even her MJ teaser was an unconvincing reveal. I don’t think I can indulge her as Mary Jane if they ever go in that direction. It’s not because of how much they diverged from the source material’s looks for the character, but more because of the chemistry that I don’t see between her and Peter Parker.

Unfortunately, those secondary characters were not the only bothersome elements in the movie. I had some issues with Spider-Man as well. The biggest problem I had is that Peter Parker couldn’t be Spider-Man if he didn’t have his suit and webslinging device. That really stunned me. At the end of the day, Peter Parker was just a supersoldier with a spider-like fighting style without his suit and gadgets. I really had trouble accepting that Spider-Man was simply a derivative of Iron Man’s technology. I really would’ve preferred having Peter Parker with mutations that allowed him to climb walls without his suit, shoot webs without his devices and so on. Fans also noticed that this Spider-Man didn’t seem to have spider senses like the original Spider-Man would have, but I couldn’t really notice this and didn’t think it was the biggest problem ever. As Peter Parker grows up, I just hope his senses will get sharpened and won’t have his guard down too often.

All that being said, Spider-Man: Homecoming is far from being a horrible movie. This is an excellent reboot, especially when the last one was pretty bad. Although I felt like the last 30 minutes felt like it was all over the place and a bit choppy, it did leave us with a lot to look forward to in Spider-Man’s next big movie. From the potential arrival of Scorpion to the development of the Sinister Six, there’s a lot to be excited about. Aunt May’s final scene was also a nice and silly moment to end the movie on too. I also liked the whole refusal to be part of the Avengers in order to embrace his friendly neighbourhood superhero role as well. Something about that scene also reminded me about that Civil War moment in the comics where Spider-Man would go in front of everyone to announce his secret identity. However the mechanical suit he’d get from Stark in the comics looked way better than the one that was teased on screen. Right now, I wish Sony would just connect all those stand-alone movies that they plan on releasing about characters part of Spider-Man’s universe with the MCU: Venom? Black Cat? Silver Sable? How can they imagine doing those movies without Spider-Man in them? Then again, I’m super excited to see Spider-Man’s next adventures as well as Tom Hardy as Venom!

Spider-Man: Homecoming (2017) is not exactly based on one particular story, but as I’ve previously mentioned, you should definitely check out  Ultimate Spider-Man (Volume 1) Power and Responsibility by Brian Michael Bendis as well as Spider-Man vs. The Vulture by Stan Lee.

Have you read these comics? Did you see the movie yet?

I’d love to talk about it with you! Tell me what you thought of Spider-Man: Homecoming (2017)!