“She is Cassandra Cain. She is Orphan. And she knows that ghosts are very real.”

If I had to bet money on the Batman-related Rebirth series that would thrive first between James Tynion IV’s Detective Comics run and Tom King’s Batman run, I would’ve thought Tynion IV was on track to delivering the better content. While his run is still highly entertaining and generally much more intriguing than what Tom King has to offer, there just seems to be roof that his run can’t seem to burst out off in order to place a mind-blowing story arc out in the market. Batman: Detective Comics (Volume 3) League of Shadows is the third main story arc by James Tynion IV within the Rebirth era. Collecting issues #950 to #956, the story explores one of the most well-known group of villains within the Batman universe: the league of shadows. Unfortunately, this secret organization remains a myth to the eyes of most individuals until now. Presenting us a rabid introduction of the league of shadows, James Tynion IV also places Cassandra Cain, also known as Orphan, at center stage and dives into her origin story with sheer brutality.

Giving Orphan a voice was probably the best story-telling decision in this arc. For those of you who don’t already know, Orphan is not exactly a character that says a lot. Most of her dialogues are just a word or two long. To compensate for her lack of communication, she’s a natural dancing assassin. Every single one of her takedowns are lethal and merciless. This volume explores her personality as well as her way of life as her origin comes hunting her through a villain who matches, if not outdo, Orphan’s own viciousness: Shiva. The introduction of this Big Bad villain was pretty well done and conveys that urgent threat that is sure to come soaring into Gotham. There’s also a certain war for power that seems to surge within Shiva and one of Batman’s greatest villain, but its inclusion never felt quite poignant. In fact, after the first two issues, the story started to become very stale and uninteresting. The major problem that is presented is the Dark Knight being blackmailed for the death of an important individual and leaves everything on territory a bit less uncharted. Furthermore, Shiva’s end goal became a massive blur and I just couldn’t understand what exactly she wanted or why. That made her final moments a little less impressive, that’s for sure.

What really stood out from this volume is the artwork, and not in a good way. One thing I really hate is the change of style from one issue to another, especially when there doesn’t seem to be any effort put into cohesion or transition. The first issue had the strongest artwork with Marcio Takara as the artist. Then the job shifted into the hands of Christian Duce for two consecutive issues. You’d think that things would quickly find consistency after that, but all we get is a hectic division of labour. With Christian Duce and Fernando Blanco sharing artwork duty and finally a return of Marcio Takara as lead artist for the final three issues. When the artwork becomes such an evident flaw throughout the story, you know something is wrong and that all you’ll get from it is a an obstacle that will hinder the experience of the reader. For me, the decline in quality that often arose throughout some of the later issues made me dislike the stagnant story-telling that was slowly floating to the top of this story arc. 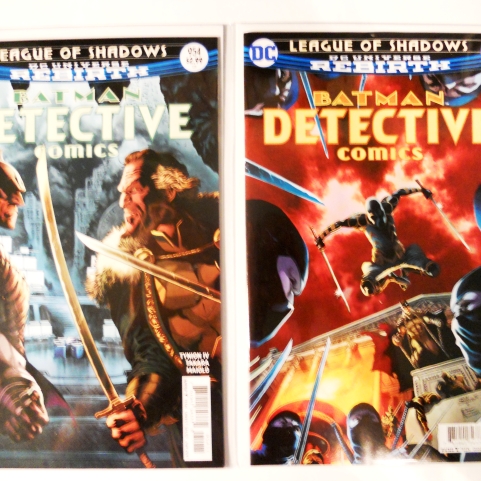 The artwork wasn’t this volumes forte and the story-telling felt a bit messy with multiple subplots and a rather incoherent main plot, but things don’t really find a balance with the characters either. The highlight definitely remains Orphan as James Tynion IV explores her past and her identity crisis throughout this volume. The arrival of Shiva launches Orphan on an even more complicated path as she tries to understand why Shiva does what she does. I did however enjoy all the analogies and development that was put into Cassandra Cain’s character. Unfortunately, while she does start and end strong, there still seemed to be some very hazy and blunt moments regarding her character in the middle. Nothing however compares to how atypical Batman seemed throughout this story arc. In fact, Batman never seemed to be any steps ahead of anything. He was lost and everyone managed to surprise him in ways that only Batman should be able to do. The only upside I saw from his character was his psychological support for Cassandra Cain, but sometimes, even that felt off; maybe just out of the blue.

While the artwork sometimes had some pretty original moments (see that moment where it shifts into landscape), there was a steep decline in quality throughout most of those middle issues that really killed any vibe the story wanted to convey. Batman: Detective Comics (Volume 3) League of Shadows however remains fun and interesting as it explores so many characters at the same time. I do love it when two members of the team would have their own moment and have their chemistry developed in an instant (i.e. Batwing and Azrael with the whole science versus religion/faith dialogue, even if it wasn’t exactly part of the main story). Speaking of things that weren’t part of the main storyline, the first issue is an oversize anniversary special and includes a couple of mini-stories, including one that serves as a nice little unexpected teaser to DC’s next huge Batman-related event (Dark Nights: Metal). In the end, this third volume remains a nice Orphan-centric story that unleashes a bunch of different new threats for future volumes to explore. Fans will want to stick around as James Tynion IV will surely have something up his sleeves in volume 4.

Did you read Batman: Detective Comics (Volume 3): League of Shadows yet? What did you think about it?

You can order your copy @Amazon Canada