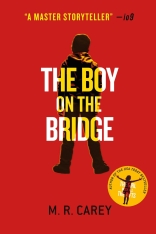 Previously in The Hungry Plague series:

The Girl with All the Gifts by M.R. Carey (Book vs. Movie)

“Things don’t end, after all. They only change, and you keep changing with them.”

Although the pacing is a bit rocky at first, The Boy on the Bridge heightens your senses and delivers a conflict-ridden, exhilarating to the core, stunning and complex story filled with characters to love and hate.

Author of The Girl with All the Gifts and Fellside, M.R. Carey also writes under the name of Mike Carey and is known for Lucifer, Neverwhere (graphic novel adaptation of Neil Gaiman’s novel) and The Unwritten. He now returns to write the second novel set in the same universe as his critically-acclaimed and now a Hollywood movie, The Girl with All the Gifts. Although it is my first experience of his writing style and his books, The Boy on the Bridge turned out to be an excellent and thrilling adventure filled with complex characters and staggering twists and turns.

One of the most crucial and important part of this story lies in its crew. A mix of scientists and soldiers, for a grand total of 12 individuals, this team of expendable characters are tossed into the wilderness to retrieve samplings left around by a team that is no more. In hopes of figuring out an antidote, or at least an inhibitor to the cordyceps virus, the characters drudge through territories filled with hungries and find themselves on a misadventure that puts their lives on the line.

Led by Dr. Alan Fournier (for the scientists) and Colonel Isaac Carlisle (for the militia), M.R. Carey does a fantastic job at creating unique dynamics between all his characters. With the aid of a third-person omnicent narrator, readers are offered with a sufficient and exhaustive look at the thoughts, and especially the motives, of all the characters. It’s the tension and the support between each of them that drives this story forward and aids in delivering a devastating ending.

One of the key players is 15 year old boy, Stephen Greaves, in which Samrina Khan believes in. This character is portrayed as an autistic child with traits that highlight his close-to-genius intellect. It’s how he sees the hungries as more than science experiments that puts him in a unique position to potentially find out what exactly they need to create a cure or a short-term remedy. To top things off, Samrina Khan’s condition as a pregnant woman, but also the epidemiologist of the team, further creates some interesting interactions and offers us with a determined and delightful character to root for.

There’s no lying here that the underlying motives of each character and how they drive each other or themselves into doing unpredictable things is where most of the fun lies in. The mere structure of the team also offers readers some fascinating catalysts to the story. From a desire to please supervisors to a desire to save the world, M.R. Carey delivers it all in a tantalizing fashion.

There’s nothing like a story about a team of expendables looking to find the ultimate cure to the world’s biggest problem to suck you right in and keep you hooked till the last page. While it did take a little bit of time for the story to find a proper rhythm, the development was still rigorous and well-executed. Setting up the landscape and developing all these characters couldn’t have been done in a shorter time. That’s for sure.

The Boy on the Bridge is far from being my last encounter with the author’s writing. This story has simply reminded me that I need to hurry up and check out The Girl With All the Gifts and Fellside already. It has also set the bar high for any story that deals with zombies and a post-apocalyptic era. Authors who are to venture in these fields better be ready for the challenge because M.R. Carey knows his shit.