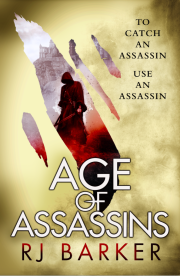 With a crippled leg, Girton has learned to use it efficiently in his apprenticeship with the best assassin in the land. While he has yet to completely master the art of killing, he still possesses a fair amount of skills that makes anyone who wants a piece of him regret in agony or suffer a quick and sudden death. A recent mission however brings him and his master in the territory of royalty and presents them with an unusual mission for these assassins: uncover a traitor who wishes to kill the heir of the throne. And so we find ourselves with assassins trying to find an assassin before the prince meets with Death, or Xus in this case.

Age of Assassins isn’t anything close to a story filled with assassins stabbing each other, hiding in the dark—maybe a little of that though—and taking down high-valued targets. This fantasy story is a look at Girton, a fifteen year old assassin-in-training, as he learns the importance of the little things in life, such as friendship and love. Having to adopt a personality in order to infiltrate the social circle of the castle in which lies are thicker than walls forces Girton to acquaint himself to a whole spectrum of emotions that you’d imagine have been burnt out of the souls of anyone who proclaims themselves as assassins. Told in first-person, except for the interlude chapters told in third-person, Girton still ends up becoming a complex and delightful child who has so much to learn and soon so much to lose.

Interestingly enough, this wasn’t a typical fantasy story. The first in a trilogy turned out to be spy thriller fused within a fantasy lore, and surprisingly enough, it was quite captivating. I did find some moments throughout the book to be quite stagnant and lose its momentum here and there, and with everything taken into consideration, the protagonist’s development was far more interesting than the hunt for an assassin. It is still worth mentioning that this was still a page-turner and that its world-building was sufficient enough to satisfy any fantasy lover’s needs. With some historical events being told through character’s with experience—also probably the only way we would have learned of this universe—the Tired Lands promises to expand and fascinate readers with every installment to come in this series.

The main mission might have been the conductor of this story, but it was far from being the source of enjoyment. In fact, while Girton was at the heart of everything and everyone in his fake persona and got clues that he relayed to his master slowly and surely, his master would always seem to be keeping her apprentice in the dark and securing most of the information regarding the main mission that she’d gather on her own to herself. If anything, it is the suspense that was thus suffering since the heir to the throne was not a teenager that you’d remotely care for. The reason why Girton’s master even wants to complete this mission is where the true intrigue lies.

Age of Assassin‘s turned out to be a fantastic debut novel by R.J. Barker and Blood of Assassins is a sequel that I would love to get my hands on as soon as possible. With the way the epilogue ends, fans can be sure that there is still so much to be excited for.

You can order your own copy now!

Have you read it yet? Do you plan to? What do you think about Age of Assassins?