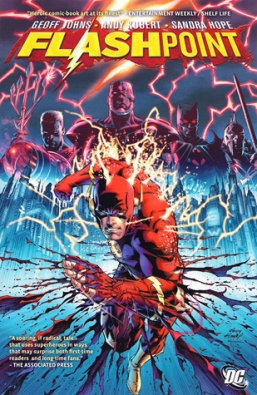 This is the story that sets things in motion for what everyone knows as the New 52 for the DC Universe. Flashpoint puts The Flash center stage as the world’s fastest man alive wakes up at his desk completely oblivious to all the life-changing events taking place around the world. Slowly realizing that things aren’t what they used to be, with people who weren’t supposed to be alive suddenly all happy and well, and others who simply don’t exist anymore, Barry Allen seeks help from the one person who could demystify everything: Batman. As things continue to not go according to plan, Barry Allen finds himself with another puzzle as Batman isn’t really… Bruce Wayne.

This event is of major importance to DC’s attempt to freshly reboot its line-ups with various new series set in the New 52. The status quo of the era is now suddenly shifted onto a whole new lane where brand new ideas and direction are pursued. What The Flash comes to realize by the end of Flashpoint forces him to take matters into his own hands, but the end result isn’t as clean as he’ll hope it was. What you can always expect from Geoff Johns is that his ideas are always clever and huge. With Flashpoint, he however goes for something pretty simple, but also extravagant in every way possible. In fact, Flashpoint is a what-if story that plays a lot on emotions, but also on the relationship between key characters in the DC Universe.

The artwork is similar to what you’d find in the New 52 Justice League run and tends to highlight the drama and action as often as possible. What Andy Kubert ultimately delivers is a stunning and epic portrait of the destruction and chaos that unfolds, and his ability to showcase it all is phenomenal. From the rapid action sequences to the full-two-page artwork, there’s simply nothing that can disappoint readers in that department, especially if its the kind of style that entertains you. It’s explosive and often cruel and dangerous. The artwork does justice to the storyline and successfully embellishes it.

While the event itself is original and powerful, the five-issue miniseries does rush through things and doesn’t take the time to flesh out some of its ideas and characters. A lot happens in such a short span of time, but I do also believe that the purpose of this story lies in its premise and the introduction of the ripple effect that this event has in store for the future New 52 stories. In fact, there’s a bunch of tie-in stories that attempt to build on this event, and bashing Flashpoint by Geoff Johns for wanting to simply set the foundation to it all seems wrong to me.

Not much of a surprise, but my favourite part of this whole event is definitely the introduction of Flashpoint Batman. This characters isn’t who you’d expect it to be and the fact that he’s so dark, gritty and grizzled in every way possible makes him such a fascinating character. The pain that this character withholds is even more intense than the traditional Batman and its amazing what he accomplishes throughout the story. In fact, Flashpoint Batman leads us to such a touching ending that it almost had me crack a tear myself. Honestly, Flashpoint is a great story for everyone to check out as it does a fantastic and quick job in showing readers what DC superheroes are capable of.

Flashpoint by Geoff Johns was also adapted as DC Animated Movie called Justice League: Flashpoint Paradox and it is one of the best adaptation that a fan could wish for. It stays very loyal to the source material, even adds in some extra content, and delivers all the bloody and gory action, with some extra sauce, to reveal one of the more mature and violent DC movies out there. The voice-acting is also quite impeccable and the visuals is as stunning as always. You can easily watch this movie as a stand-alone, as long as you know your basic Justice League members as the whole twist on their stories is what makes this story arc so fascinating. Oh, and also if you’re good with a little bit of violence with your superheroes.

Flashpoint was also loosely adapted in the third season of CW Network’s The Flash TV series. Anyone who follows the DC shows knows what kind of repercussions this event had on the universe, and knows who to blame for it all. It is however worth mentioning that the TV series adaptation barely portrays the grandeur of the event, since the TV shows don’t have some of the A-list superheroes like Batman, Wonder Woman, Cyborg and Aquaman. But one thing the show does well is explaining it all and making it all easy to chew for viewers. I guess it’s one of the upside of these family-targeted TV shows.

Besides the animated movie adaptation and TV series adaptation, Flashpoint is also planned to be adapted onto the big screen as The Flash’s first solo movie. This is a very bold move by DC and could turn into a disaster if not done properly, but it is without a doubt an exciting project. For those who know the story of Flashpoint, the fandom is pretty pump at the idea that some actors we’ve seen so far in the movies could take on some very big roles in a Flashpoint movie. Just imagine Spoiler, highlight to read: « Jeffrey Dean Morgan, known for his role as Negan in The Walking Dead, who played Bruce Wayne’s father in Batman v. Superman take on the role of Flashpoint Batman, and Lauren Cohan, known for her role as Maggie Greene in The Walking Dead, who played Bruce Wayne’s mother, take on the role of Joker. » Of course, with the way the movies so far have been done, I wouldn’t be surprised if they change up the original storyline a lot. However, Flashpoint could also turn out to be a beautiful opportunity for DC to reboot its movie line-up and bring new, original and fresh stories to all our beloved DC superheroes. It will all depend on Warner Bros and the directors/writers who will have the monumental job of adapting these stories.

Have you read it yet? Have you seen it yet?

Do you plan to?

What do you think about Flashpoint or Justice League: Flashpoint Paradox?