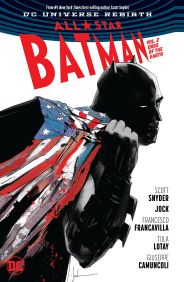 Previously on Rebirth’s All-Star Batman:
My Own Worst Enemy (Vol. 1) by Scott Snyder

Scott Snyder is the man! I have yet to run into a story concocted by him and to have been utterly disappointed by what he delivered. His vision is always fresh and innovative. There’s simply little room in his mind to be redundant and inconsequential in Batman’s canonical stories. After making such a big name for himself with the New 52 Batman series and lately with the insanely huge and cataclysmic Batman-centered event, you sort of expect to be wow’ed by his writing. All-Star Batman is however his outlet to delivering not only well though-out stories, but to also explore art in ways that have not been done before.

Ends of the Earth is a four-part story that collects issues #6-9 of this series. There’s also a bonus story arc that concludes “The Cursed Wheel” that began in My Own Worst Enemy. At first this second installment seemed extremely short and scared away all expectations I could have as my brain kept on telling me that it might not have enough pages to deliver something worthwhile. Who could with just four issues, right? Good thing that Scott Snyder is a man with a particular set of skills who could turn the dullest things into the most prized possession.

The main story arc is what I would describe as poetically tragic. Each issue could be seen as a chapter that focuses on a particular villain. With the artwork being swapped around between different artists (Jock, then Tula Lotay, then Giuseppe Camuncoli and back to Jock), the style adds dramatic value to the story that Scott Snyder tells. With a lot of depth in his writing, themes of death and life, as well as passion and desire, are weaved into each villain’s core motivation. It’s not even just about exploring why they do what they do, but to see who they all do it for.

The artwork isn’t exactly something that will appeal to everyone. The drastic change from one issue to another is pretty apparent and some of them might work much better than others for fans. What I liked about this particular alternating-style is how it all blended well with the writing for each chapter; instead of looking at it as a whole. The way the final chapter also wraps things up makes it even more neat and impressive. This really isn’t a Batman story. It’s all about the villain’s, and Scott Snyder does an impeccable job in bringing into play each of these villain’s particular personality while making sure that the artwork did justice to the darkness and cruelty in everyone’s life.

The artwork in general also doesn’t follow the conventional structure you’d find in comic books. What Scott Snyder and the artists on this creative team do on that regard is really intriguing. It destroys the fixed pace so that it can have its own rhythm, and it really plays well with the poetic writing.  The colours are also very distinctive from one villain to another. It’ll feel like you’re in a trance reading some of these stories. It can also be argued that some of these villains also make it inevitable to go through that very psychedelic experience.

The Cursed Wheel storyarc is probably the least important and also the least interesting part of this volume for me. It has nothing to do with the main story arc and rather continues an identity crisis story around Duke Thomas. It’s sort of like an origin story for the character and clues fans into where exactly Duke Thomas finds his suit, name and purpose in life. While it wasn’t the most captivating thing out there, it still had Scott Sndyer’s signature all over it and made it ultimately intriguing in the ideas it was trying to convey.

Aiming for something that goes full circle and ties it all together with a nice twist was really ambitious, but Scott Snyder knew how to deliver it. Ends of the Earth is a great volume that continues to prove the world why he’s one of the greatest writers DC has ever known. I’m definitely pumped to see how the next volume goes.

Have you read it yet?

Do you plan to?

What do you think about All-Star Batman: Ends of the Earth?