Let’s get it out of the way. The Killing Joke by Alan Moore is one of my all-time favourite graphic novels ever. I had no doubt it would blow my mind before even diving into it, but once I did, I spent months raving about its greatness left and right, whether people wanted to hear about it or not. It sparked my love for comic books and it showed me that the medium is not a joke and is capable of exquisite story-telling under the right hands (writer and artists). I consider the graphic novel flawless and I swear I could write a whole thesis—my review of it back in 2015 sort of attests to that—on its depth and boldness. I mean, come on. A story that not only explores one of the many origins of the Joker as well as the many facets of insanity and justice? This is why Batman’s playground is the best. There’s so much grey area to delve into and so much complexity to go with it, it’s almost impossible to not feel at home.

If there’s one thing I’ll always be reserved about, it’s novelizations. I’ve never liked the idea of movies being turned into books and could never get behind the idea of taking the time to read these. A whole discussion on their worth and what they actually bring to the table could be brought up, but it’ll have to be for another day. DC Comics have however been doing novelizations of some of their comic book stories for quite some time; there are over a hundred of them out there to this day. The idea of turning a comic book into a novel does seem much more intriguing to me since we get more out of something that draws part of its story-telling vitality from artwork. The only way I could find out if there’s actually something worthwhile in this process was to try it one for myself, and that’s were DC Comics’ latest novelization came into play.

You could already imagine how high my expectations were regarding this book, but I’m glad to say that this was far from being a disappointment. Although it is essentially based on the classic graphic novel of the same name, it doesn’t restrain itself to its content. Although impossible to summarize without giving away some of the biggest punchlines, the story is told in two-part, interspersed with some flashback sequences. The first part dives into a hunt for criminals that have been venturing in the drug business, especially in regards to the new and trendy psychoactive known as Giggle Sniff. The second part takes readers on a ride through madness as the Joker elaborates one of the most sadistic plan to break James Gordon and Batman.

Christa Faust, author of hardboiled crime novels, as well as Gary Phillips, a crime fiction novelist, team up together to tackle one of the most daunting challenges you could possibly imagine. A note from the authors beforehand warns readers that there are some presumptions that readers will have to take into consideration before diving into the story. I believe this is key to your enjoyment since there are some things that some would not call canon that are infused within the story. Furthermore, the authors adds quite a lot of subplots to the original story to not only connect some dots that were initially left for readers to do what they want with, but to also help readers contextualize and connect with some key characters.

Does this novelization however capture the core essence of what The Killing Joke is really about? Yes and no. The reason I say that is because of the additional stories that are incorporated to flesh out the story. One of the biggest so-to-say changes is a segment that takes place a couple of days before the main event. Throughout this part of the story, a lot of secondary characters appear, even if they were never part of the original script. I’m not going to lie, but this part was fun to read about and offered readers the chance to acquaint themselves with some heroes and villains that they aren’t likely to have heard of or at least haven’t seen around often.

There’s a great amount of research put into it all and it shows in the descriptions, even if these descriptions were more often just stating things rather than building an atmosphere. Even the characters that take the stage come with a brief and quick introduction of who they are. The bits that are added by the authors to make a coherent whole, an actual novel, made for an entertaining action-packed experience, but it also diluted the themes explored by Alan Moore. The fact that it was short and straight to the point in the graphic novel made it easier to deliver all the subtle details and morals without ever letting go of the reader. In this novel, it’s harder to see those meaningful moments that made the original story so iconic, even if they are still present integrally.

Christa Faust and Gary Phillips’ novelization remains a wonderful and entertaining attempt to recreate the magic of Alan Moore’s Batman: The Killing Joke. Fans of the graphic novel will find in this story a captivating rebirth of the classic story with the inclusion of new subplots and characters to the tragedy that is bound to take place.  To the very least, this novel will make them want to crack open their own copies of the graphic novel. Everyone else can find themselves introduced to a wonderful story in the heart of Gotham that will show you how much damage one bad day could do to a person. 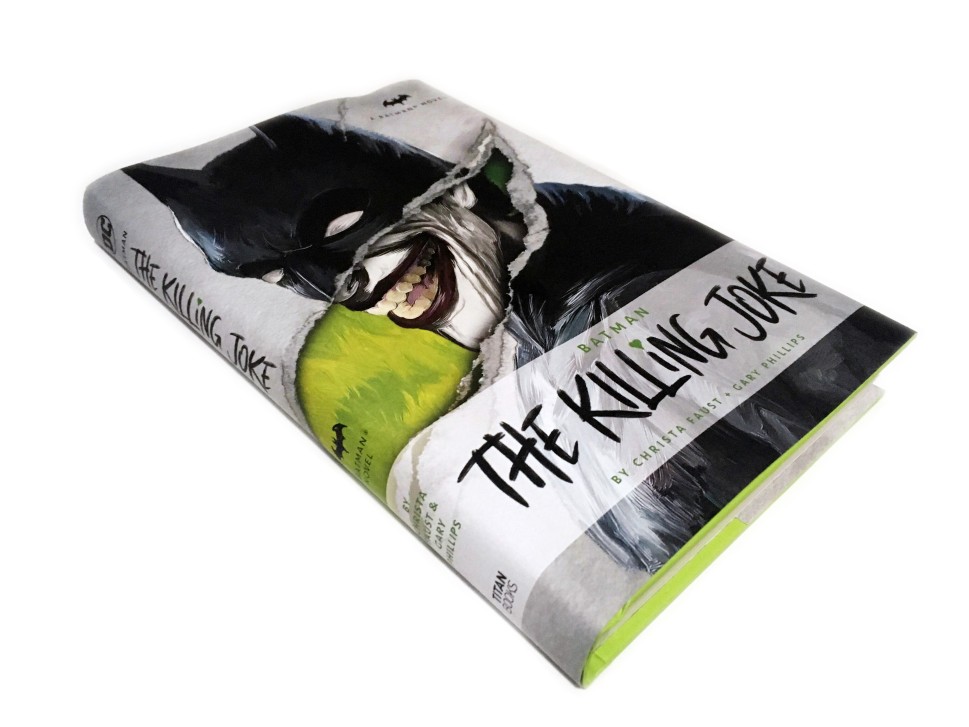 Thank you to Penguin Random House Canada for sending me a copy for review!

Did you know a stand-alone Joker (2019) movie is in the works and has Joaquin Phoenix taking on the role of the Clown Prince of Crime?! The above footage shows us our first look at him as the Joker, or at least as the comedian. The movie is said to explore the Joker’s origin story and is not set within the DC Extended Universe. Thoughts? I know I’m excited! 😍😍