It wouldn’t be too far-fetched to think that some people are born to be leaders. With their charisma and their immutable sense of direction and ambition, they are able to steer any ship in any direction, convincing all of their followers than the mind rules on the body. Others prefer a life free of responsibilities and strive in the art of either listening to order or rotting in a corner. But one particular ship destined to encounter magnificent beasts, when it least expects it, lies a crew chained to a penchant for despair and tragedy. What they are about to discover is a life where walking the plank is no more an inevitability but an option, a choice that they possess and believe in if guided by the proper captain. Following the magnificent success of his Wounded Kingdom trilogy, R.J. Barker now looks to embark on a new seagoing adventure with the first book of his Tide Child trilogy, The Bone Ships.

What is The Bone Ships about? Set in the Hundred Isles, in the midst of a dreadful feud between two rival nations that have been at it for generations, the story follows the incompetent and hopeless Joron Twiner, shipwife (understood as the captain) of the Tide Child, a Black Ship, a vessel for the dead, carrying those whose faiths are set to roam the seas till death swallows them whole. Condemned to serve their nation on this ship with a crew of misfits and convicts, the putrid hate and lack of cohesion and structure lead Lucky Meas Gilbryn to challenge the captain to a duel with the status of shipwife as the ultimate prize. Her victory is followed by the fisherman Twiner’s demotion to second-in-command and sets them on a perilous hunt with news of an extinct sea dragon, known as an arakeesian, being spotted in the archipelago. With ships being built out of their bones and allowing crews around the world to establish their reputation and power based on their access to these bones, the chase fuels crews with a desire to reign victorious in the grand scheme of things. Now, who will shift the balance of power in their favour?

R.J. Barker continues to deliver some of the best characterizations in the genre with his latest book. While the story kicks off with a protagonist that seems oddly uninspiring, you’re quickly brought to understand that he’s an observer who fumbles with his emotions as he witnesses a real shipwife, the same who spectacularly dethrones him, who vows to whip her crew into shape and bring glory and respect to those condemned to sail on the Tide Child. The dynamic between these two characters is golden, as you watch John Twiner dwell on his faith and reminisce about his father’s teachings while Lucky Meas Gilbryn unsheaths her bravery and brilliance, trying to tame the unsavoury crew by threatening them into giving her the respect she deserves. As almost polar opposites, you watch them grow and understand each other’s strengths and weaknesses, looking beyond their differences as they haul themselves into surviving the onslaught from the treacherous obstacles that the sea has to offer, whether it is the pirates or the sea dragons.

While the story delves into the complexity of trust, loyalty, and respect among individuals in a society that essentially floats and fights within a bone-centric economy and politics, The Bone Ships was much heavier in world-building. R.J. Barker does an enthralling job at painting the seven seas with the right strokes of words, from his meticulous descriptions of sea-dragon bone ships to his insightful portrayal of this world’s history. Without immediately diving into the plot of the story—which might sink some readers as the pacing can be tempestuous—R.J. Barker scours the scenery, successfully depicting the foggy, hefty and turbulent atmosphere, allowing the reader to be fully immersed into a world where the sea reigns with deadly ships lurking in the horizon. To accompany this sea-faring spectacle are maritime action sequences that are brilliantly brought into existence with powerful and thrilling scenarios where the dread is almost palpable.

The Bone Ships is a nautical exploration of the high seas, crawling with ancient sea dragons, with rival crews ransacking for the big loot that will have the tides on their side and set them on course towards conquering the war. 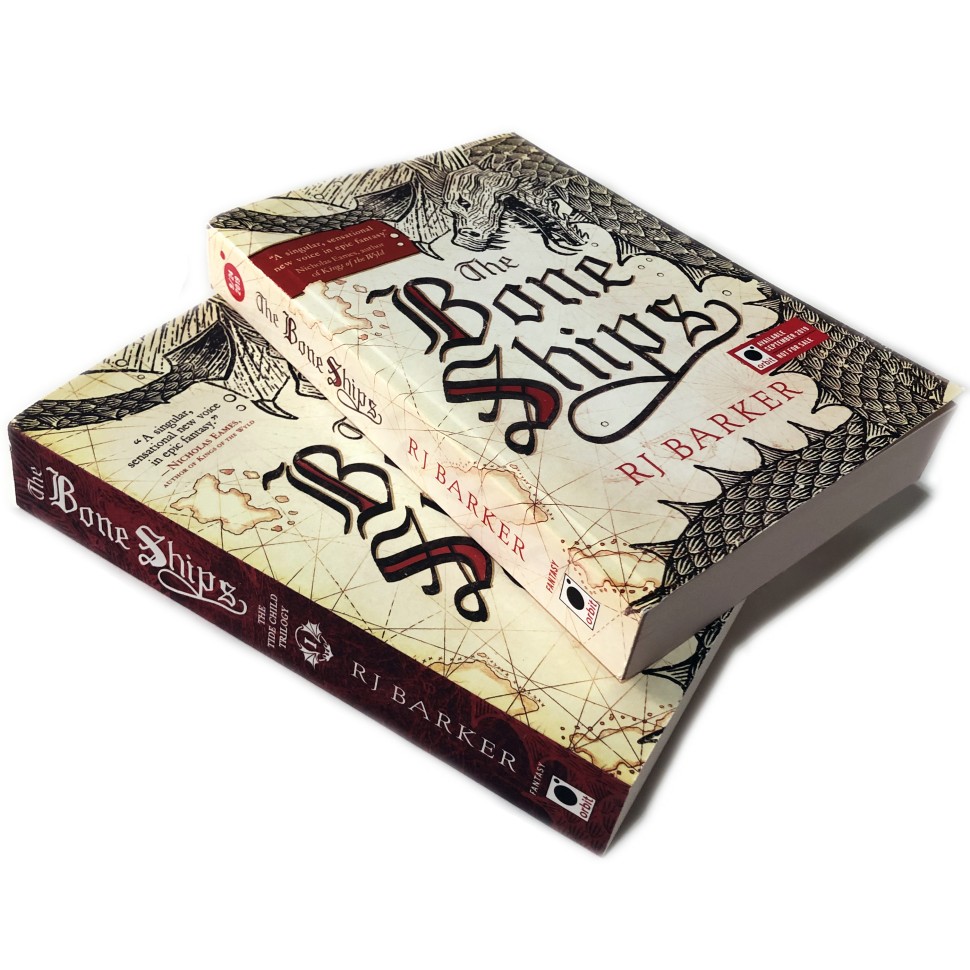 Thank you to Hachette Book Group Canada and Orbit for sending me a copy for review!